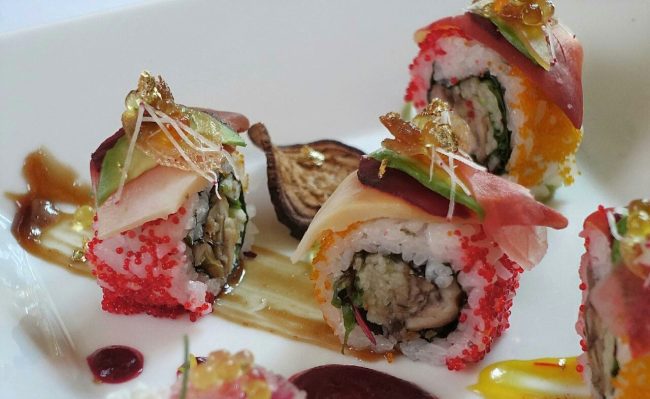 In its sixth year of this competition, Bento Sushi chefs from all over the nation are invited to create a roll. Six finalists are then stationed head to head to appeal to the likes of select judges and attendees of the big event for a $5,000 cheque. It gets really crafty up in here, as chefs introduce ingredients out of the norm of the world of a sushi roll, think: rice paper, strawberries, and cashews.

Last year’s Bento Sushi Champion event was just as memorably delicious, there were party trays of sushi from Bento’s retail stories delivered, and another six chefs participating for the title. From my memory, Haruo Oikawa won both the first place and people’s choice award! I was excited to taste what was to come this year.

Sushi is truly an art piece. That one above, the Jiong Roll (which I guarantee would make a great phone wallpaper) was created by Tony Wang from Calgary, Alberta. It wasn’t only gorgeous, it was delicious! Grids of mango, salmon and cucumber and lined with rice and tobiko. Another personal favourite was the Cupcake Roll, once again by Haruo Oikawa. It had a crisp netting wrapped all around, filled with sweet potato and topped with a creamy sauce and cashews.

And now for the three winners…

The Cupcake Roll won both second place as well as the people’s choice award!  The Sakura Roll was another of my favourites, the pickled radishes added the perfect balance to the already creamy roll of avocado, shrimp and crab meat. The Eight Treasures roll was the most gorgeous of them all, glistening flakes of gold leaf and a gradient of artic clams to compliment. It was so great to try new flavors from Bento’s chefs all over the nation.

Here’s a bonus peep at the judge’s table: there’s Pocky sticks and wasabi peas for the palate-cleansing between sushi bites. We also tried bites from The Chef House itself, which is a restaurant staffed with George Brown Culinary students right across the street! Below, you see a steamed egg omelette with miso and lobster.

Thanks to Bento Sushi for inviting me along to join the eat-tivities on for the Sixth Annual Bento Sushi Competition! It was all delicious fun to watch and eat.

Congratulations to all of the winners!

See the past winners, here.