Liberty Commons, a brewpub by Big Rock Brewery and O&B in Liberty Village 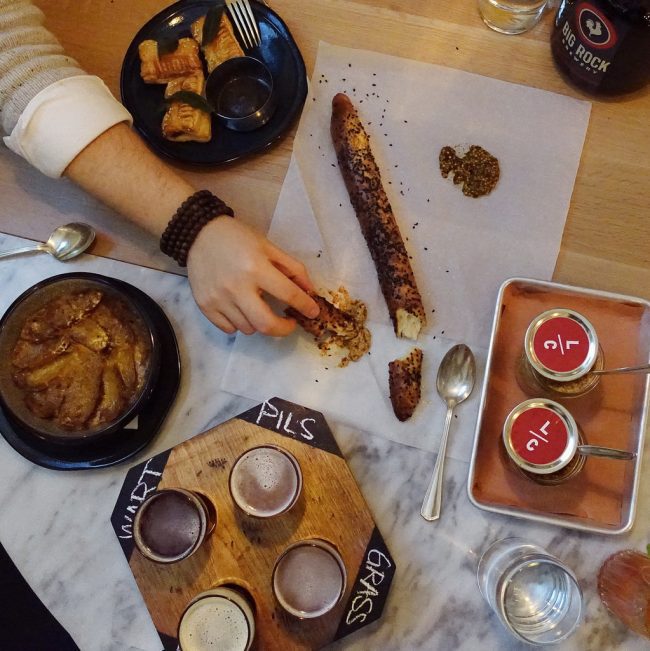 With over 30 years of brewing experience, Big Rock Brewery is known to step outside of the comfort zone when innovating with beer recipes. One of their first brews was crafted in Calgary in 1985, Traditional Ale, an English style Brown Ale. Today, it remains one of their most popular beers.

As both a gastronomy lover and craft beer fan– I am stoked about this partnership!

Here, six beers can be made at any given time!

On a daily basis, Liberty Commons offers eight signature series of Big Rock’s draught beers and two experiential nano taps which are exclusively available to the brewpub. Big Rock’s beers can be enjoyed to-go at their bottle shop by a six-pack or growler (the freshest you can get it!), or enjoyed for dine-in rightfully accompanied with O&B’s food on the lower level. In addition to the Big Rock signature draught beer, beer-based cocktails can also be enjoyed and wine by the glass and bottle. A range of guest bottles and cans are also served specific to Ontario local microbreweries.

The two-level heritage space brings industrial elements of beer production into the design. Featuring fermenting vessels, growlers and barrels featuring Big Rock’s trademark. The bar and dining room are set to seat 140 patrons, whereas two event space rooms, the ‘Barrel Room’ and ‘Drink Tank’ seat 32 and 24 respectively. The patio is also on its way for construction!

The right fit for a new taster of Big Rock Brewery’s beer is the Tasting Flights of Four, four glasses in 6oz each for $10. Guests can select one of three set flights called the ‘classic’, ‘contemporary’ or ‘adventurous’ or completely customize the set of four themselves based on the draught selection.

Chef Ryan Lister sticks true to his promise for rich, uncompromisable flavours. With at least a third of the dishes and condiments on the menu including Big Rock’s beers, this is the type of hearty pub food that should be matched with the brews.

The pretzel ($7) is presented in a long, skinny baguette form with no less flavour, saltiness and chew as a regular pretzel. We also try the no hold barred description of the common burger ($17) by Chef Lister: “It’s the combination of my two favourite things, the Big Mac and the Buddy Burger”. Bringing all of the delicious traits we know: pickle mayo, a juicy beef patty on the softest bun you could bite into.

Knowing that the menu was an assembly here and there of Chef Lister’s favourite, I couldn’t turn down dessert! For a sweet ending, a cast iron was served, me mum‘s baked rice pudding. A depth of mixed wild and round rice and spent grains (the leftover after the mashing process in beer-making, which is usually sent back to a farm as feed). Sweet treats were sprinkled throughout, with every mouthful being different. One scoop would hold a melt-away mango bite, another would be full of rich chocolate and another, a crunch of pine nuts. The spent grains added a truly nutty taste, although I was at first surprised, I now wish there was more of the grains to each bite!

Big Rock Brewery is best known to create brews to satisfy a wide spectrum of palates according to the season. Rightfully so, as the temperature changes, seasonal produce sets the tone for the type of beers that are created. Combining the rich, rooted flavours from the kitchen of Chef Lister with the sessionable beers of Big Rock, I am beyond pleased with the comforting fare within the space and offerings. This opening has been a long-time coming and surely lives to its anticipation. You’ve got to add Liberty Commons at Big Rock Brewery to your list of places to enjoy tasty eats and fresh brews.