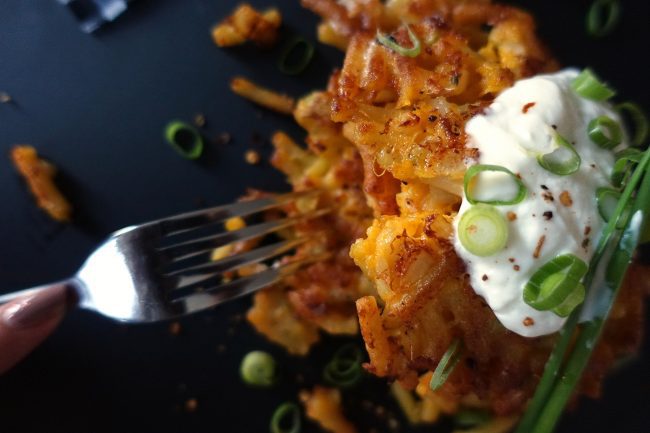 Although box mac & cheese is such an inexpensive pantry item, it seems like such a luxurious snack to me. Mainly because the first time I had one of these was three years ago during the period of my low-carb days. I would only have one wheat meal a week or a fortnight where with a dash of chili flakes, the mac & cheese would occasionally be an indulgent sider along with a protein and some veggies, I would eat each macaroni tube one by one until my plate was done.

When I was sent a care package for Italpasta’s new Macaroni & Cheese range, I leaped for joy. Aside from being free of artificial flavours, colours and preservatives, it’s also supportive of our Canadian farmers! I feel better about this treat this time around as it’s made purely of Canadian wheat! 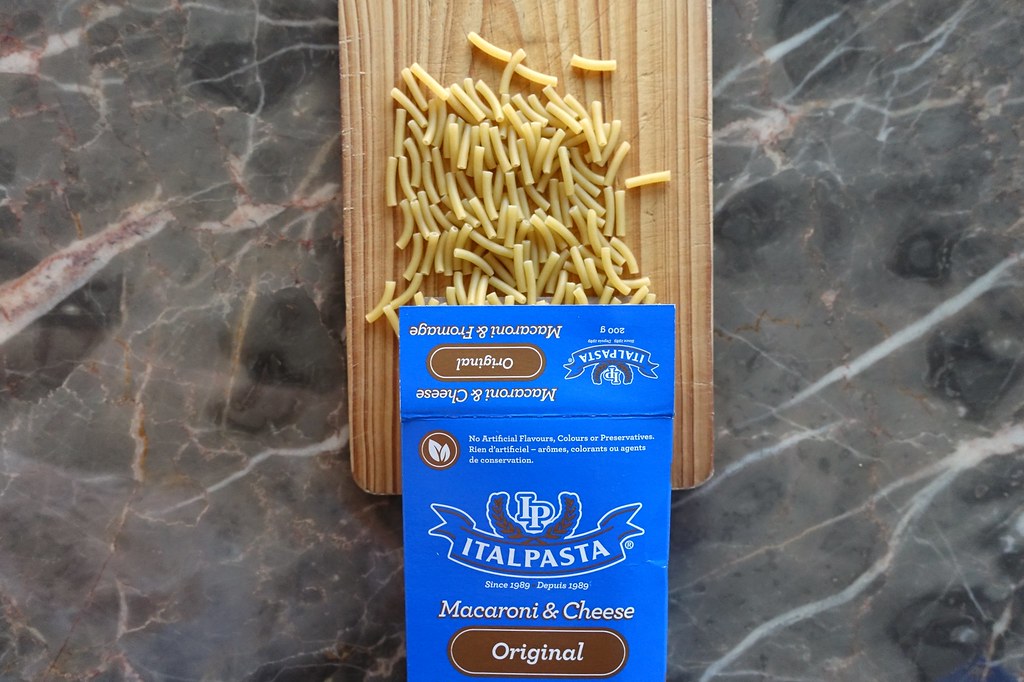 We needed to up the ante. 100% wheat you say? Let’s even it up and fry it up! Taking inspiration from a stack of latkes I sighted at a food court not too long ago, we decided to take that challenge on. The biggest obstacle is discovering how much yolk it’ll need to stick together.

There was no better moment than to substitute the butter for my godly Howie’s Garlic Butter.

Feeds 4.
Recommended: Use use half of the mac & cheese instead so you can have a mix of both.

Steps:
1.  Boil pasta as per instructions.
2.  Drain and get as much moisture out of the pasta as possible.
3.  Add in butter and the packaged powder cheese while it’s hot. No water.
4.  Mix in jalapeno, garlic and egg yolks.
5.  Sprinkle in corn starch and mix.
6.  Scoop a spoon of the mac & cheese to fry. Start with a smaller latke first as it may fall apart very quickly. Test out what your mac & cheese can handle.
7.  Rest on paper towel to soak excess oil.
8.  Top with scoop of sour cream and garnish with green onions. 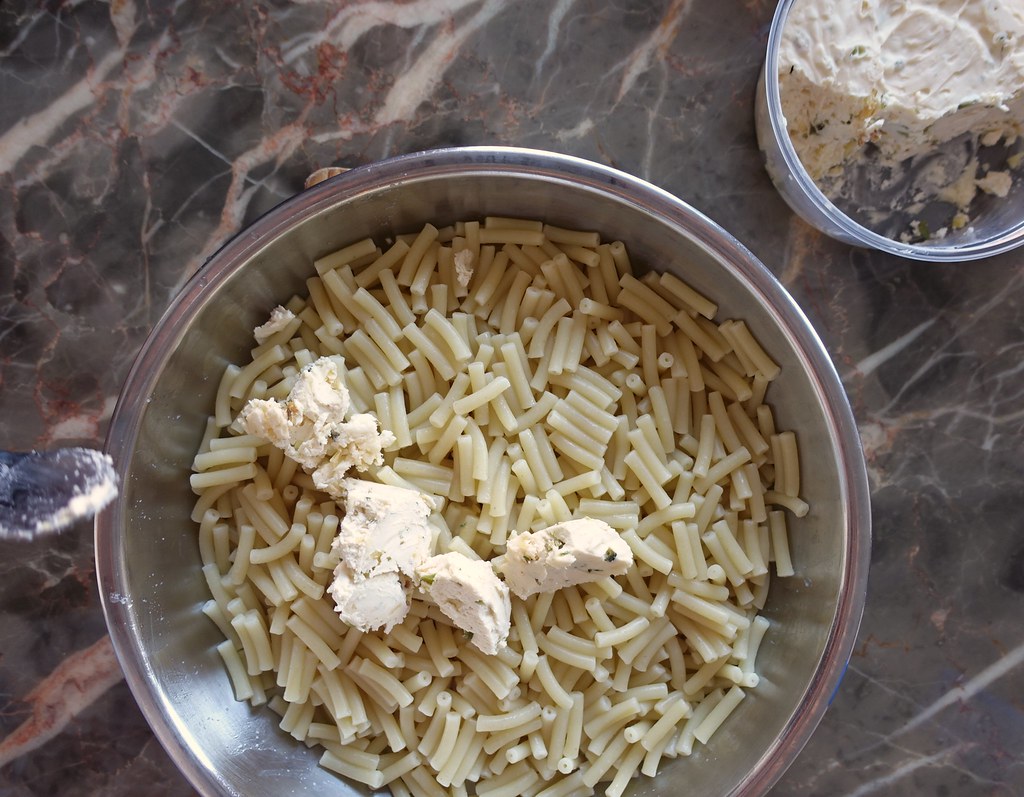 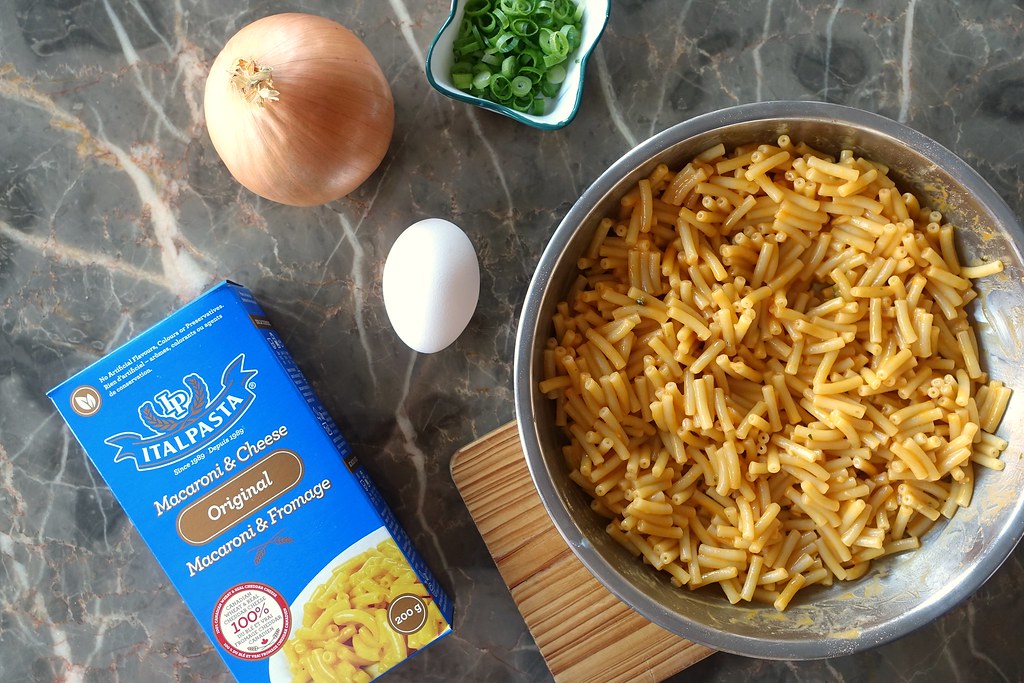 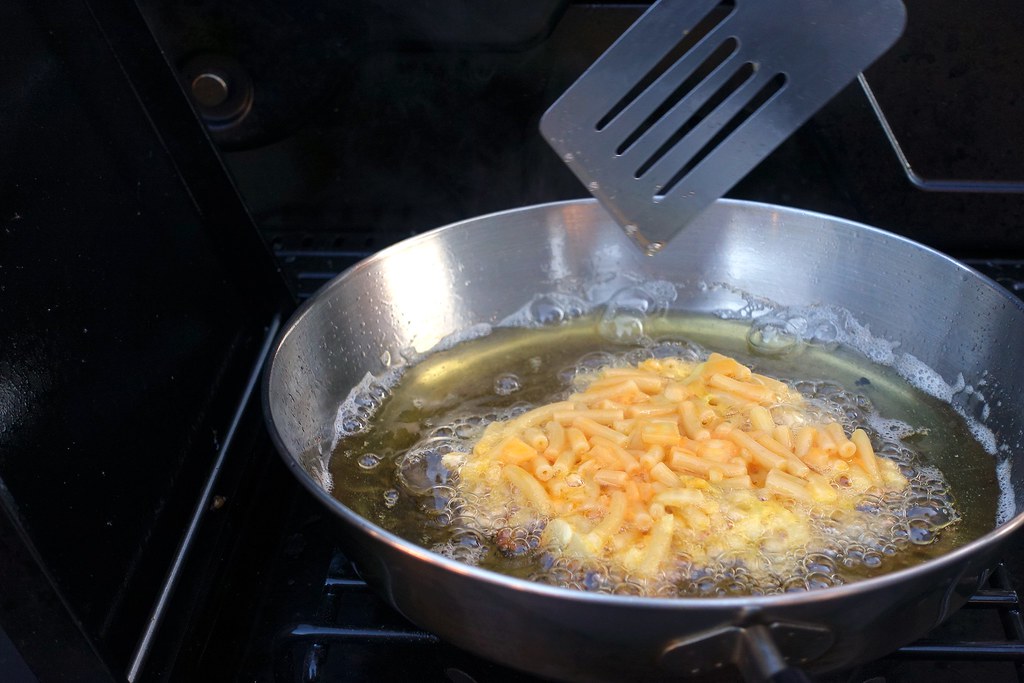 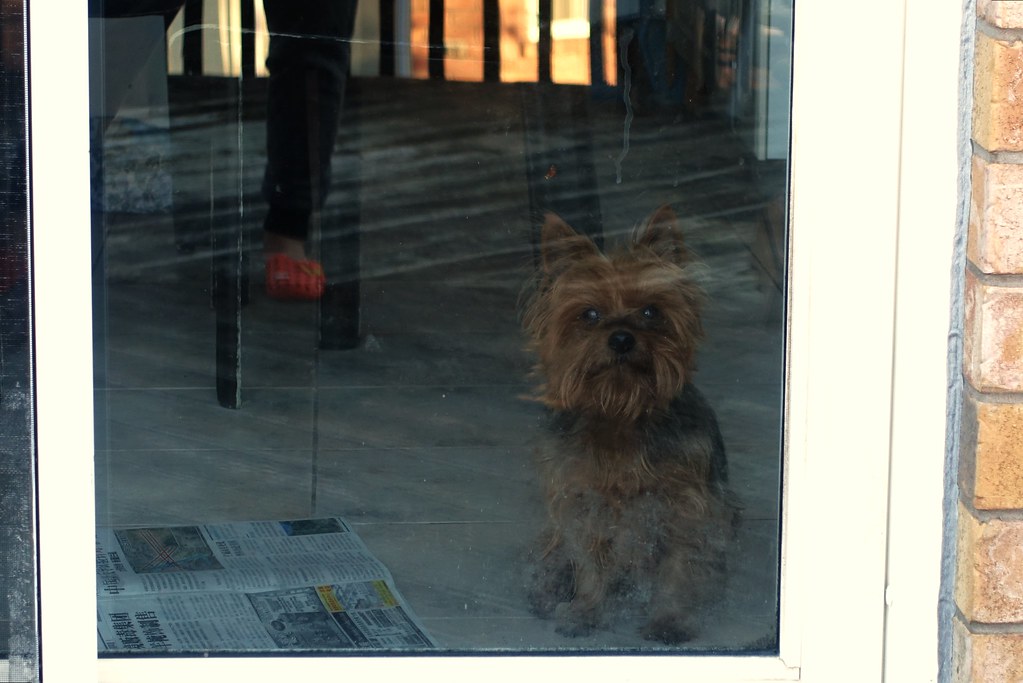 Here’s cutie lil’ Pepper watching us from inside. Such an observant pup.

Some frying and assembling later with toppings of sour cream and green onions, we had our finished dish! We couldn’t help but to nibble along the way. The garlic jalapeno butter gave the right taste, definitely couldn’t have achieved this addictive taste without it. Nonetheless, I’ve provided a recipe of substitutions to achieve the same. 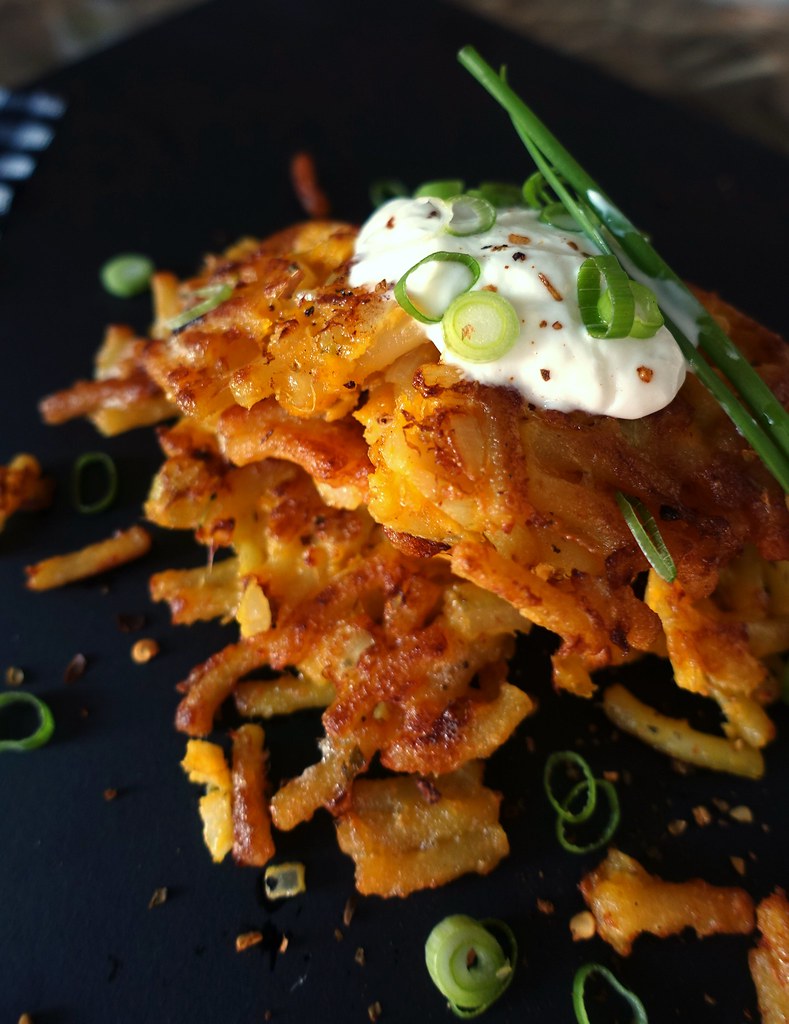 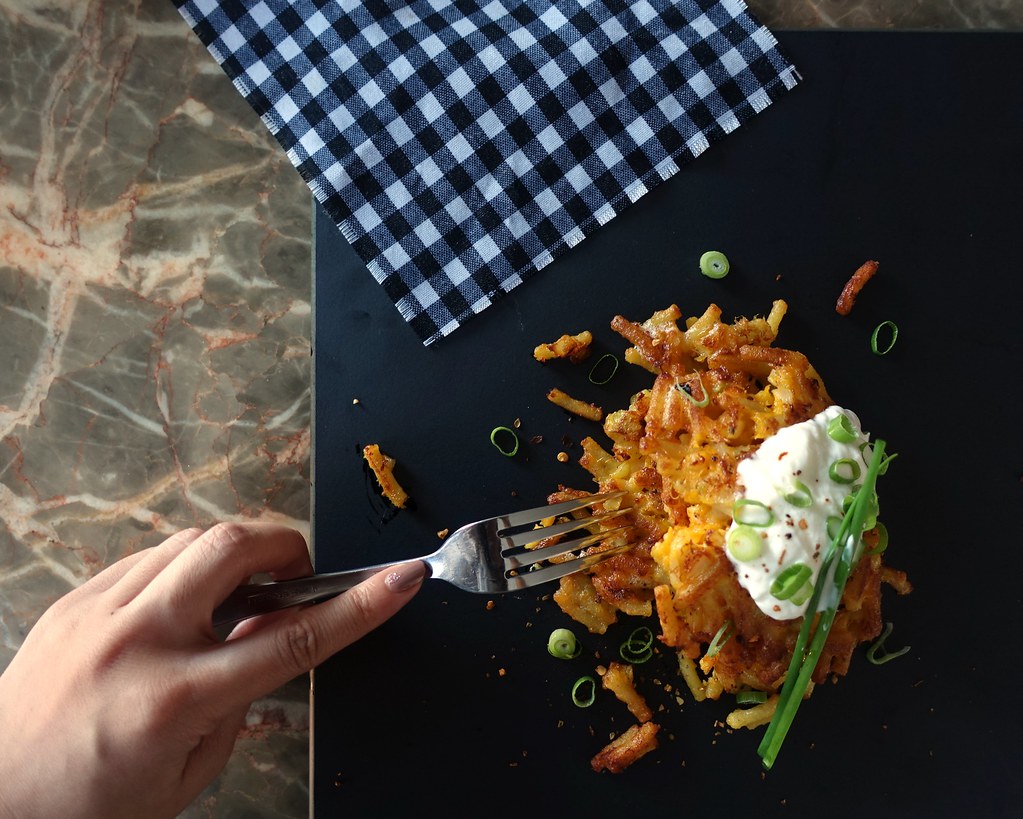 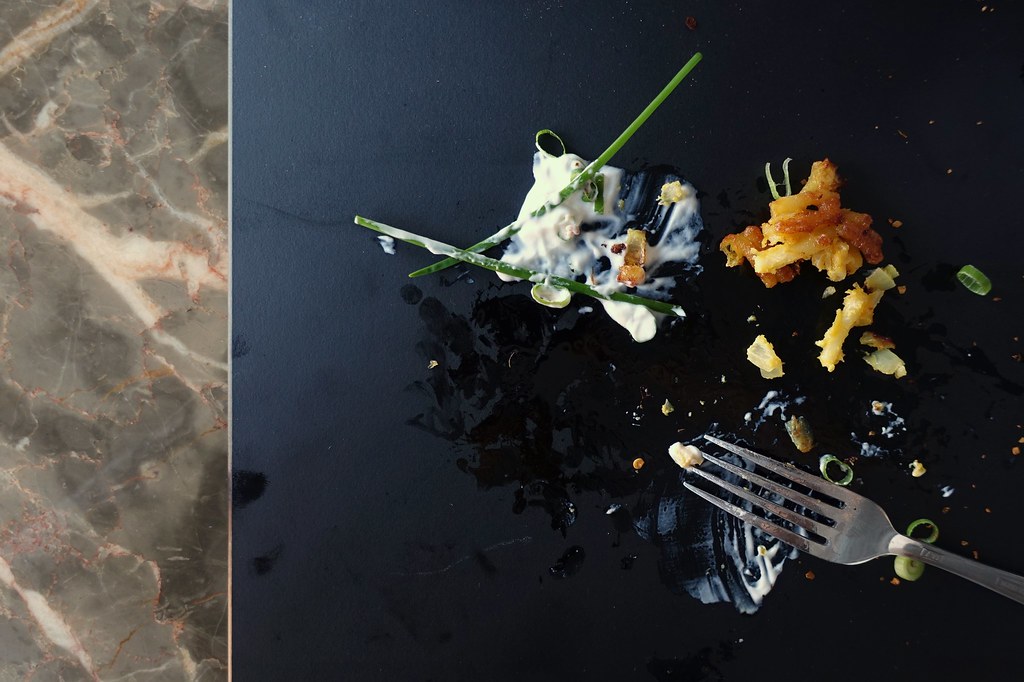 And we finished that… way too quickly. One box of Mac & Cheese made 12 generously sized latkes. Very hefty. For just a snack between a few people, I would advise that after step 3, to divide the mac & cheese into two portions. One portion to nibble (and add the recommended water), and one portion to fry as a latke – and of course further divide the ingredients list into half if you’d like to go this route!