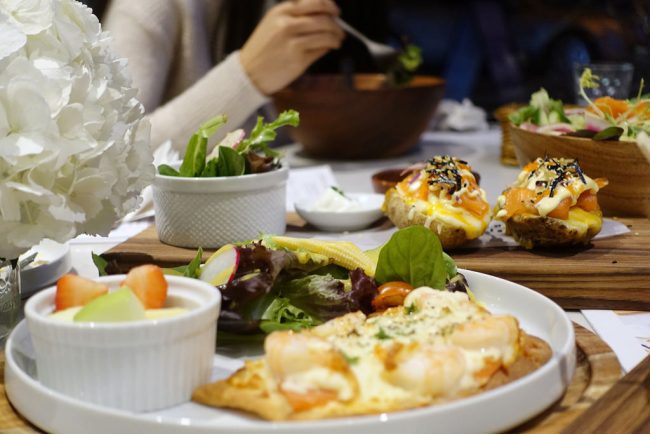 Baldwin Village is one of the top locations I would recommend a visit to in Toronto. Wandering in from Dundas Square to Baldwin and  McCaul, it’s a whole new light (☺). The diversity along this strip is unreal. From Japanese, Mexican to the best Asian fused Gelato in the city, you could plan out worldwide meals in one visit.

Light Cafe is a recent addition to Baldwin Village, coming in a day after Artic Bite‘s landing. They have 3 location within Taiwan and have moved over to Toronto to spread their roots further.

I really do love seeing worldwide foreign franchises making its way in our city. You get a new visual of how the world sees food from different places. Explaining it the best way I can, I would feel like the meal set offerings are similiar to that of Panera Bread. You get a food item that’s the focus of your meal, then additions of salad with house dressing and bread / fruit salad in addition.

Bright, contemporary space which is a Instagrammer’s dream during the day – I was eclectic of the floor to ceiling living wall (putting my bag into the base which held very… very transparent looking water). Among our food selections, we delved into the Truffle Mushroom Croissant Sandwich ($10.95), Lobster Bisque ($9.25), Bacon & Onsen baked Potato (single, $5.25) and Lobster Roll ($14.75). I was astonished by all of the delicious bites. Three items felt like it was right to share between two.

I actually went to a #ChowderChowdown event just the day before, so my seafood soup expectations were at the highest it’s every been. I loved Light Cafe’s rendition of the lobster bisque. It was rich and creamy, and the garlic bread was absolutely perfect. The Truffle Croissant – seriously, there’s no going wrong with that. the bites were buttery and rich in truffle flavour. The ultimate umami.

I’ve tried Lobster many times – but there’s alway something lacking. I believe I’ve found the best to exist in Toronto for the price point and generosity. The bread was buttery and crunchy and loaded up with the right amount of lobster (for $15! A true deal).

When it comes to the caffeinated beverages, Light Cafe does not mess around. The most excellent presentation was offered with each dish – in this Cotton Candy Coffee ($6) in particular – the pleasure of pouring hot coffee only a very quickly dissolving cotton candy puff was one on it’s own.

But, boy oh boy… When it came to the waffle desserts. Our jaws dropped. The most lovely presentation, I felt like I was at Disneyland with those black mickey mouse-like ears. Black using charcoal, an incredibly smokey taste at that. The ice cream was rich and delicious. Mango was probably my favourite. All the fruits! Each were around $9.

All in all, I had a delicious time at Light Cafe. I’m not a stickler for sweets or caffeine, but their savoury items won me over in flavour. The price range was at a good point considering the amount of wandering students in the area, I would definitely come here again to introduce this place to a friend over a coffee and small eats. At this point, I’m curious of what the Taiwanese Light Cafes look like.