Toronto BBQ Week, presented by Samuel Adams is inviting you to hop into 15 participating restaurants until June 12th for a sweet $15 deal of BBQ and a Samuel Adams Boston Lager 16 ounce pint.

Samuel Adams is the calling for all meat lovers!

Smoked, grilled or braised, the flavours all come out. Check out #BBQWeekTO to discover each unique dishes being offered their interpretation of what BBQ pairs best with a Samuel Adams Boston Lager.

To celebrate the introduction of #BBQweekTO, I was provided the opportunity to rally up a crew of BBQ-lovers to take on three restaurants in Queen West, making our stops at: Broncos, Dog & Bear and Smoque N Bones.

Toronto’s dedicated slider bar. Step inside for a drink, or pick a spot out on the patio picnic benches to soak up the sunshine. Pair a good time with plentiful options of drinks, sliders and quick eats starting at $3. 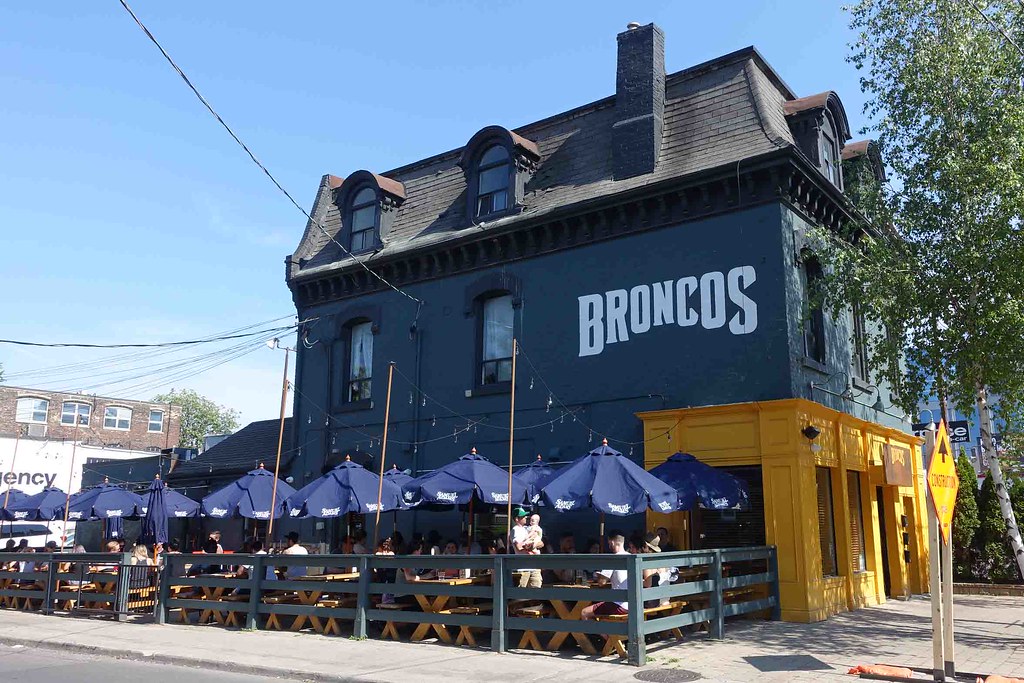 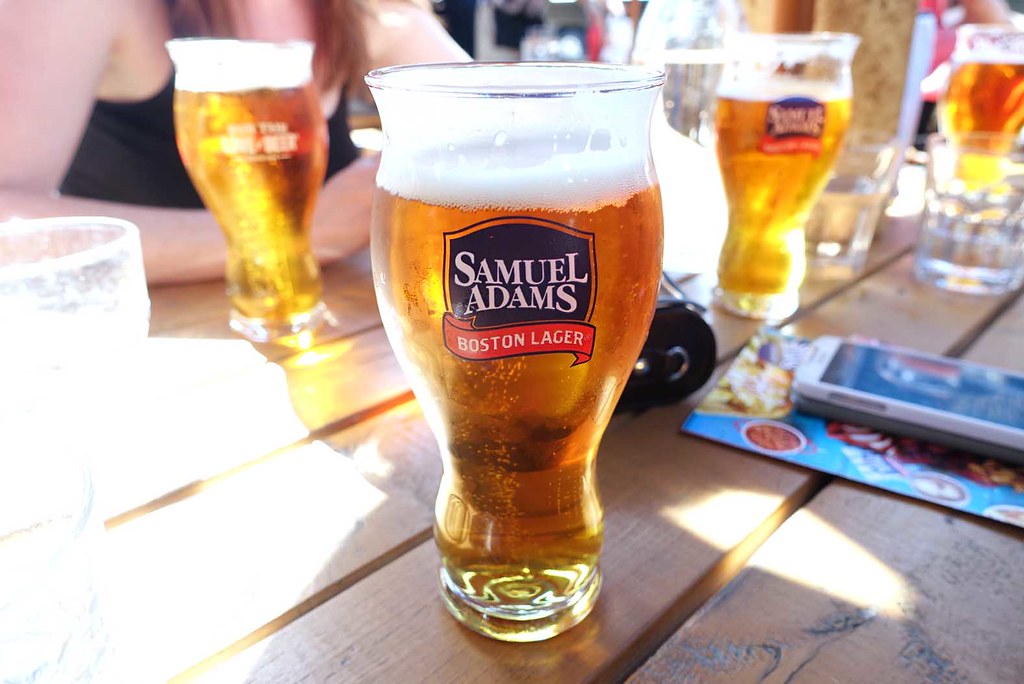 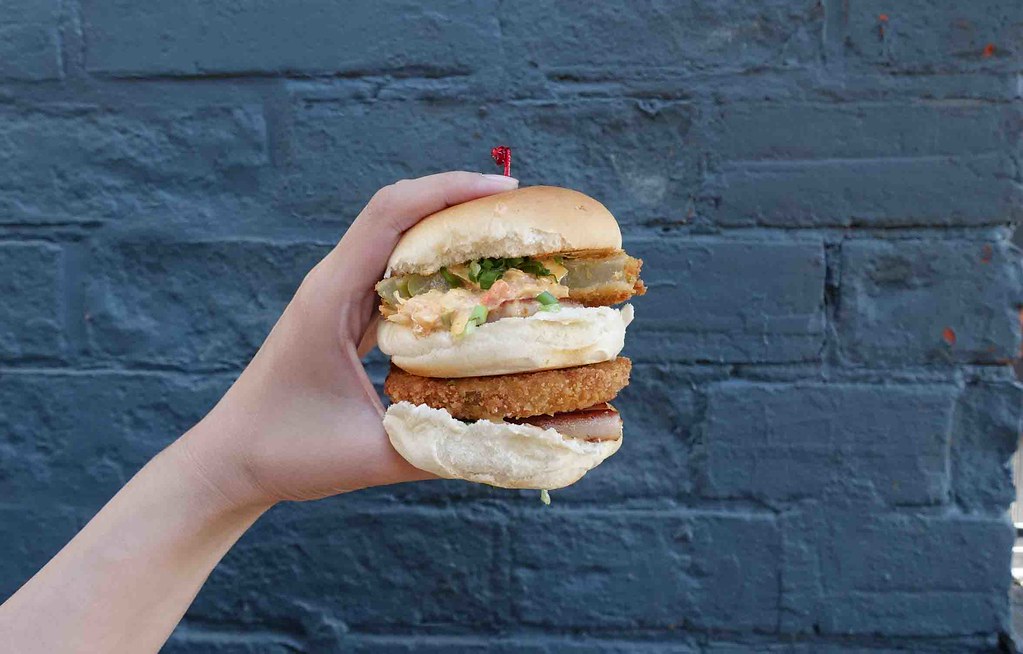 Boy, was I eager for this combination, because this was the doubled up version of their usual sliders. Chef Kazim presented us with a Triple Smoked Pork Belly BLT in a triple bun patty, panko-fried green tomato, all dressed up in a spicy slaw which included bonnet peppers for a kick. For the side, it couldn’t be anything better than a serving of herb-dusted duck fat fried tater tots. 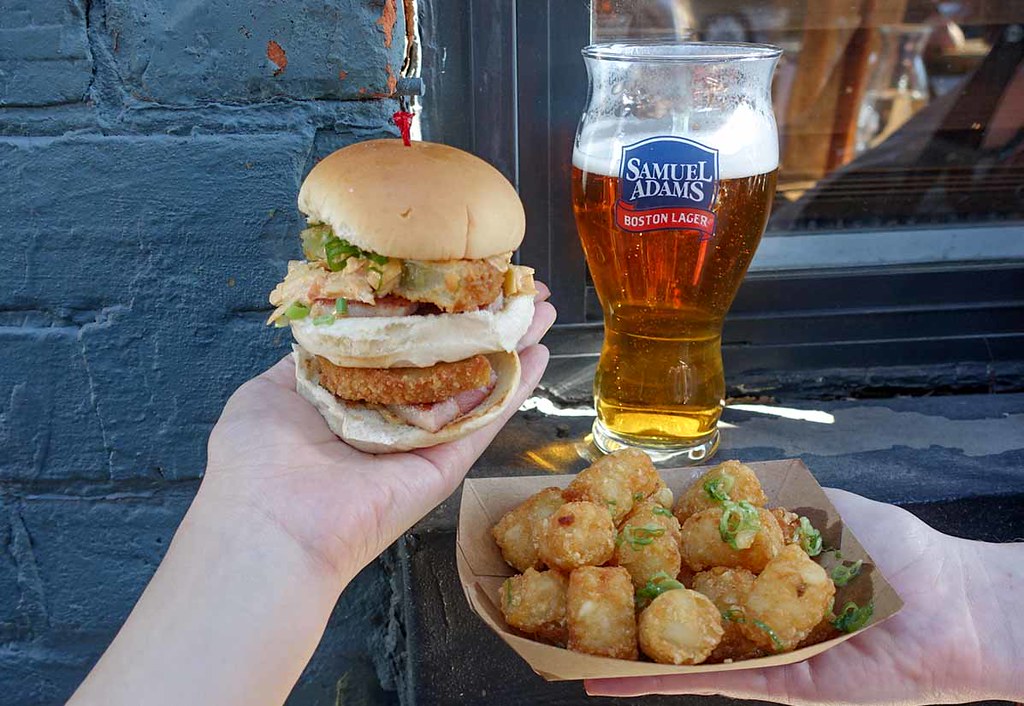 Dog & Bear on West Queen West, a British-style tavern favoured by the neighbourhood as a go-to spot to enjoy classic British pub fare and major sports events on TV. 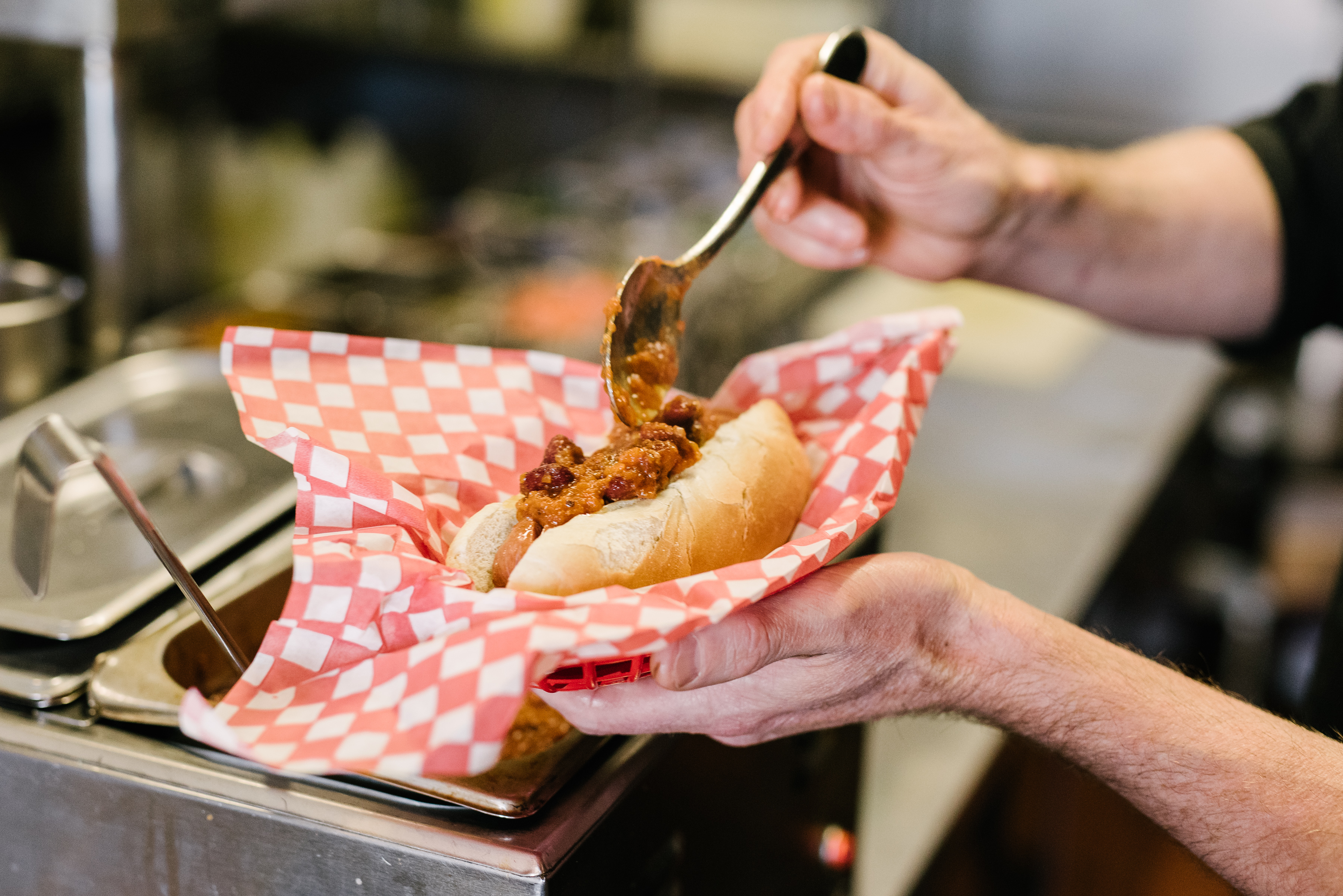 For our second stop, we were served up, quite literally a “dog and bee…r at the Dog & Bear” (pun thanks to Karen). This was a loaded hot dog like I’ve never had before: plopped with a Beef Chili, Cheese, Onions and Pickled Jalapeños on a Nathan’s Hot Dog in a soft bun. Now let the messy eating begin! 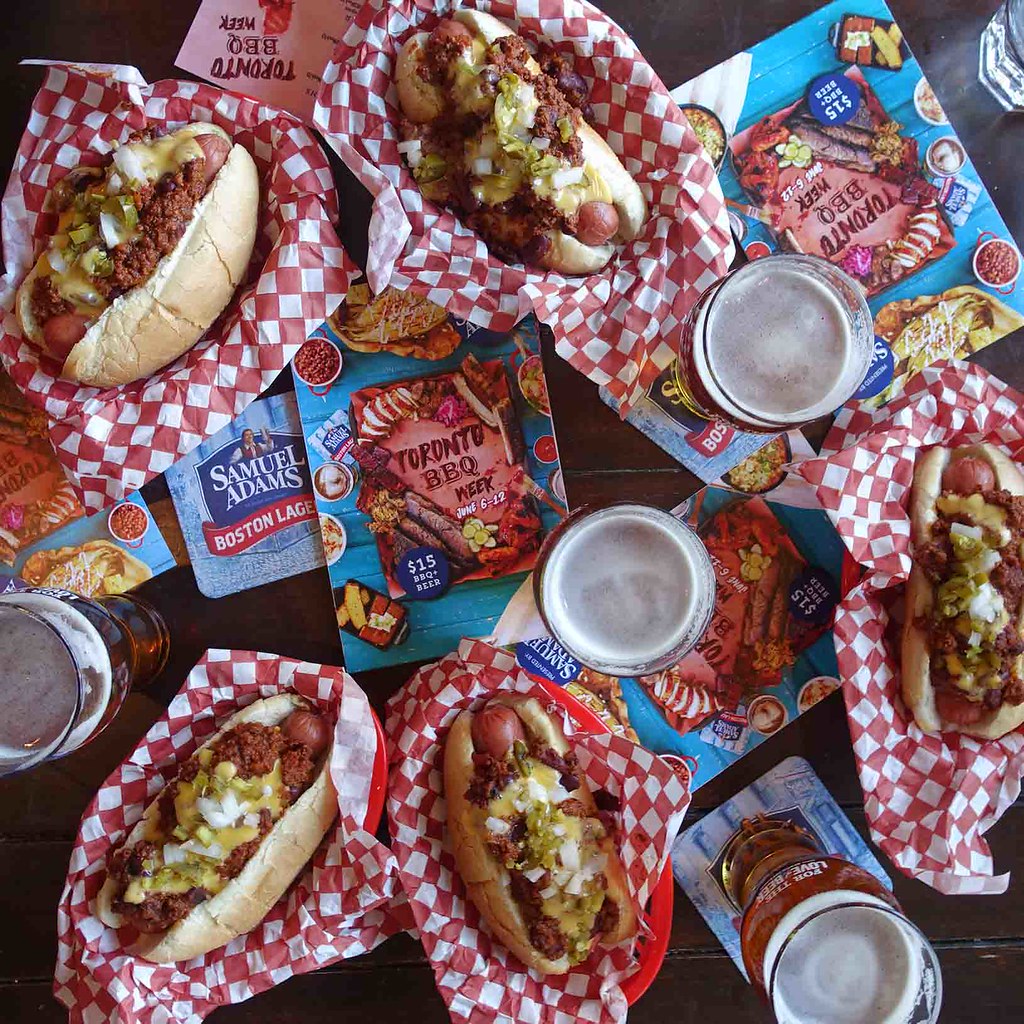 The spot on Queen Street West with fantastic BBQ options; Chef Alex draws inspiration for his menu from four pillars of BBQ – Memphis, Texas, Kansas and the Carolinas. 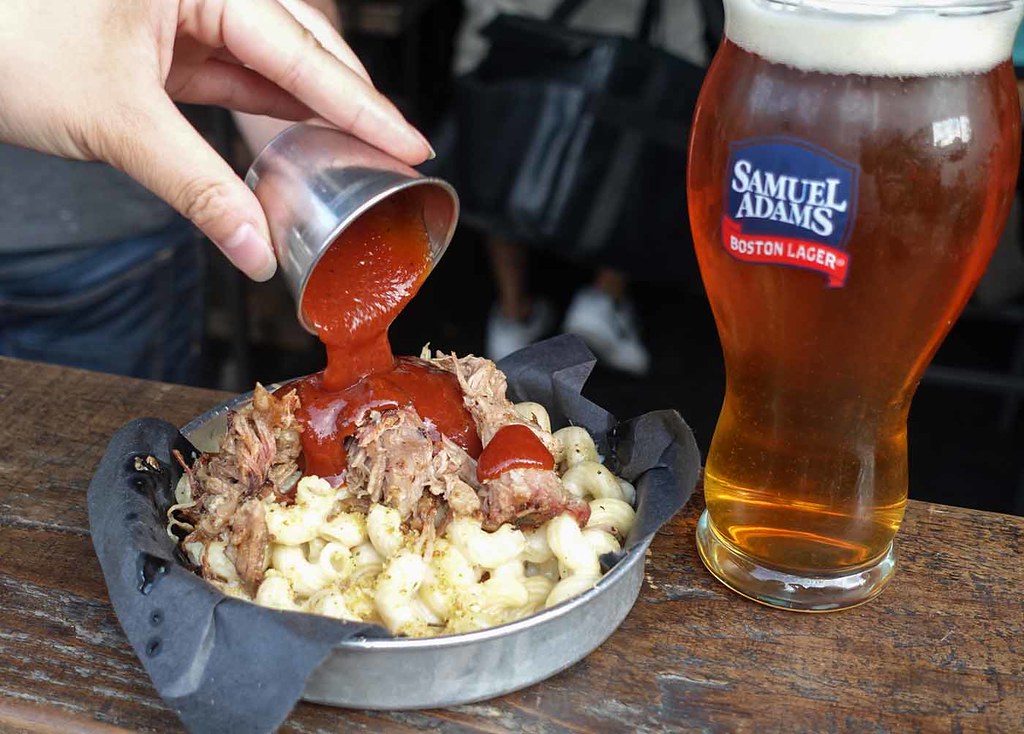 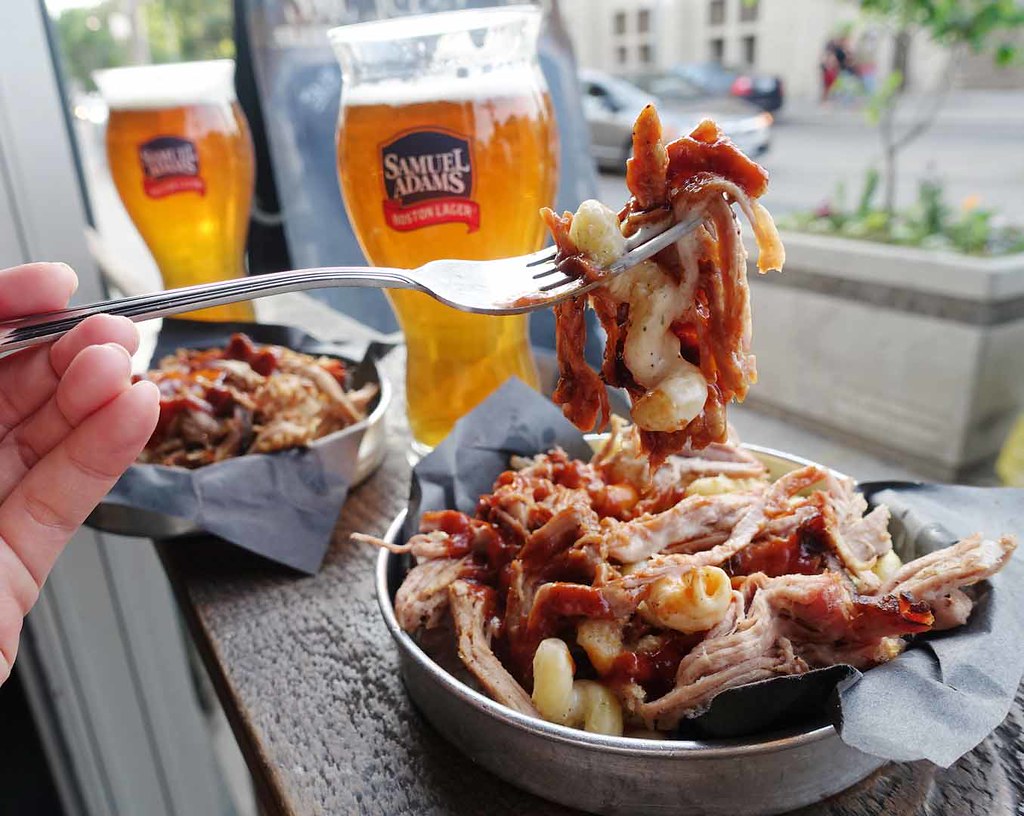 I was most excited for Smoque N Bones‘ addition of  Toronto BBQ Week. There’s nothing more comforting than Chef Alex’ consistent roll outs of creamy, Chopped Cheddar Mac N’ Cheese. As part of #BBQweekTO, the bar has indeed been raised with an offering of Smoked Pulled Pork as well as housemade barbecue sauce to pour on top.

The creamy, rich flavours of the Pulled Pork Mac N’ Cheese by side Samuel Adams Boston Lager to wash it all down was perfect. The malt, slightly sweet Lager provides a wonderful pairing to the caramelized feature of the pork and creamy mac n cheese.

Broncos, Dog & Bear and Smoque N Bones each made a fun and delicious take on BBQ, serving their dishes as a very suitable pairing to a chilled Samuel Adams Boston Lager. Samuel Adams Boston Lager has a balanced flavour with a start of complexity and soft finish, it’s a refreshing end to start yourself for the next rich and saucy BBQ bite that each dish of this visit has served up.

Thanks to Samuel Adams and Toronto BBQ Week for allowing me to experience this meaty (mighty) feed. Now, I insist that you get your meat sweats running and try taste #BBQWeekTO for yourself as it’s only around until June 12th!

P.S. Toronto BBQ Week has a trip for 2 to Boston, as well as a VIP tour of the Samuel Adams Brewery. No purchases necessary! Try your luck on the website.