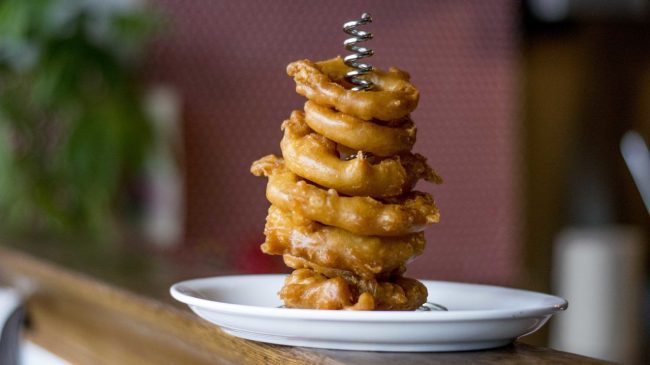 No kidding, Fish & Chips is a true art! Sea Witch Fish & Chips opened its doors on St. Clair West in mid 2014, invisioning to become the top-of-the-mind spot for the occasional fish-and-chips cravings! Since then, this cozy spot has developed it’s dedicated regulars for a very special reason, it’s  incredibly crispy and golden batter… this spot made “Top New Restaurants of 2014” for a mighty reason! Sea Witch Fish & Chips offers five varieties of fish: Arctic Char, Atlantic Haddock, Pickerel, Pacific Halibut & Pacific Cod. Along with these tasty varieties of fish, SWF&C also has special sides – including, a Halibut Poutine! Now, that, I’m curious of. Fish & Chip prices start at $11 – and $6 for the kids! You better bet Sea Witch is kid-friendly.

Take away ready to wrap and go!

“The Witch’s Brew” (House Chowder), $6
Ah, The Witch’s Brew, very well named. This house chowder is filled with the house’s fish favourites: Pickerel and Halibut! A dash of pepper is all that is required to elevate the flavours into my (new) favourite chowder, ever! Along with the soft and delicious pieces of fish, there are potatoes, onions and carrots. So simply and heavily flavoursome, I enjoyed it!

Sea Witch has a one of a kind batter, one of which they have contributed a tremendous amount of time and labour into perfecting. It only takes three mere ingredients! The flavours were heavy in beef talon and held a heavy crunch! In all – I can compare it’s elasticity and savoury texture to that of a Chinese Doughnut.
We have the Onion Rings, so beautifully presented! There is a heavy amount of batter enveloping it. With each bite, you’ll have a mouthful of oily batter and a mere sliver of onion. A definite treat, but it is a definite must-try at a price of $5!

Next up is the Halibut Cake! The first ever Fish Cake I’ve seen that has been made up of Halibut! And it really worked well! It was all complimented incredibly with a pickled vegetables that I can’t quite put my finger on yet. I finished the whole saucer of it.

The Slaw that SWF&C serves up is extraordinarily well balanced. I love a good slaw to cut through the oils of fish and chips, this was the holy grail that glided me through the dishes. The slaw is simply created with cabbage and parsley, the parsley in the mix lifted the whole dish, making it a must-order with your Fish & Chips!

You can never forget Old Tyme’s Ginger Beer with your plate of Fish & Chips! The best!
Ah, and what we’ve all been preparing for… The plate that Sea Witch would like you to run back for: Fish and Chips! The fries were absolutely heavenly, gosh. Each uniformly cut in-house, and fried in a good ol’ Talon Beef Oil. It was heavily crispy, and the bite was as though you were biting into a mash. It was perfect. Easily making the list of one of the best fries that I’ve ever devoured! The fish on the other hand, as beautifully thick and coloured as it appeared – the batter was all that I found myself cutting through. I found a mere Halibut less than a centimetre thick beneath the heavy batter. This dish was easily saved in the beauty of the fries and zesty, creamy and chunky Tartare sauce. You’ve done it right, Sea Witch!

The batter is a definite treat, they’ve truly perfected the most elastic, chewy and savoury batter made our of three simple ingredients! I am very impressed. I would certainly make a return for the The Witch’s Brew House Chowder, a slaw and Halibut Cakes & Chips combo as my orders for my next visit! I also enjoyed their housemade treats, each presented in a tackle box and ordered by the bag, these are very well made!
Sea Witch Fish & Chips
Address: 636 Street Clair Avenue West, Toronto

*This meal was complimentary, opinions expressed are my own.