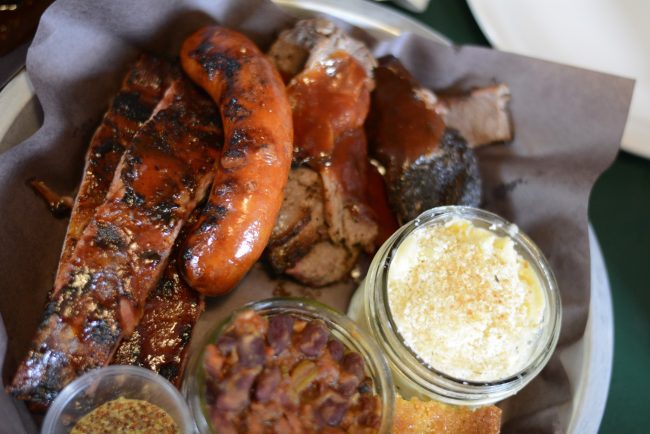 When I crave meat, these three words are all I ever asking for, but is it really such a hard plead to grant? It was Day 1 of Ever After festival and we were looking for a pre-festival meal. As we were driving along this scene, it began to sprinkle and we spotted a “gentlemen’s club” – which was clearly a stripper joint – with a damn spit roasting outside it’s big black wooden doors. Okay… The feeling of this area all started off as strange.

Finally, we arrived, and without a proper breakfast in the morning, we were hungry! Our un-proper breakfast was a packet of instant noodles each and seaweed snacks: this is how you eat when you’re travelling not too far from home.

Entering Lancaster Smokehouse Southern BBQ, the space was big and seating was ample my guess would be at 80 or so people at once. The restaurant stretched wide, and we selected our spot at 2pm right by a booth with a tad of light shining on our table. 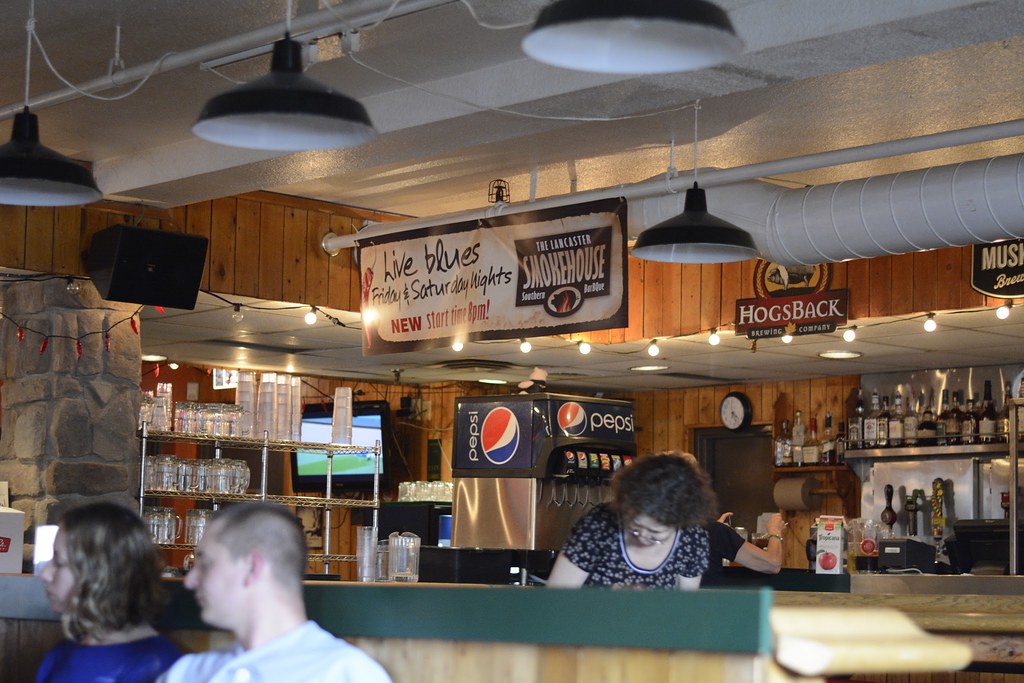 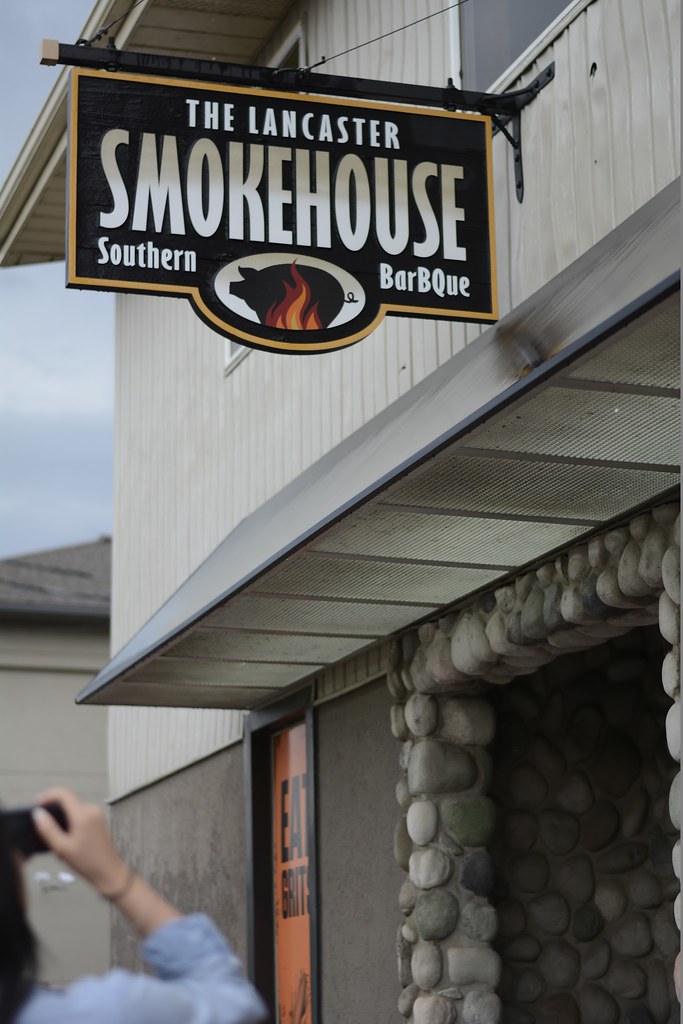 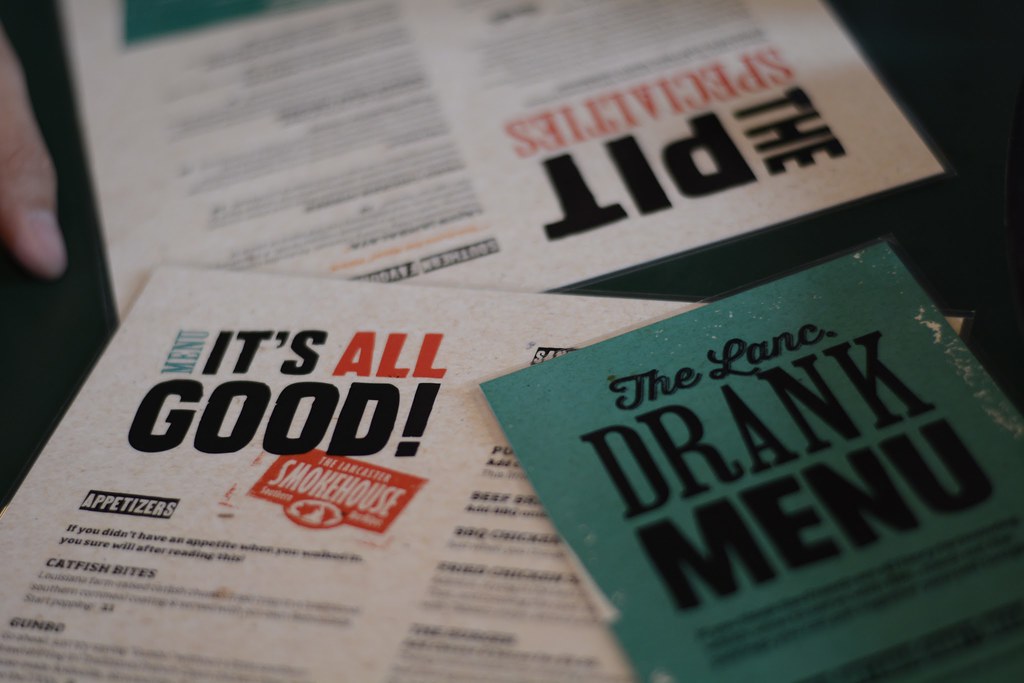 As soon as we were settled down, ordered a beer each and had a look at the menus, I took another look around and noticed that the place very quickly began to fill up. There were many large groups of families, all looking like they were also each beginning their Saturday afternoon with a meal from Lancaster Smokehouse. I wonder what they were ordering?

As for the menu, we just went what whatever we felt like. And lucky for us, the menu was very well organized, noting out the house favourites, gluten-free and pork markings for those concerned and special notes. We saw the pigtails on the menu and we had to have it! Described as smoked, beer-braised, grilled and sauced, it was everything we wanted then and there. That, as well as an order of a platter plus sides to share. I like to have little tastes of everything when I’m at a BBQ spot, so this was just right in my books. 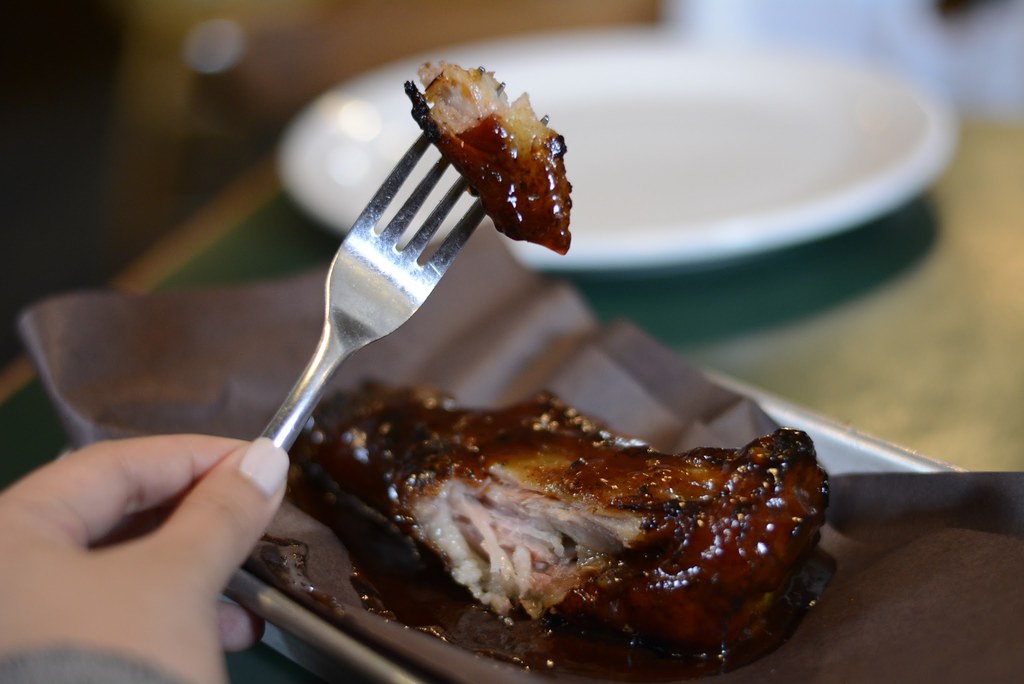 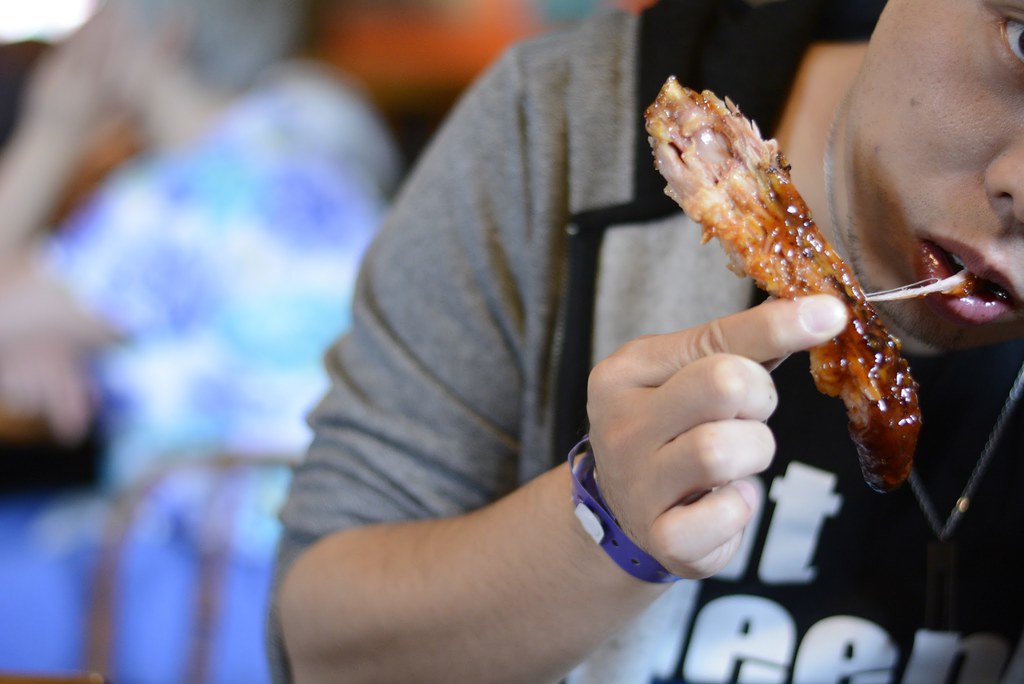 And, little did we know that this $4 pig tail would be having us writing home for weeks. It was a secret that I wanted to keep, and it’s been a year since I last relived these photos. The sauce that layered the pig tails were grandma’s secret sauce, I want in on that secret. It was thick, sweet with the right spice and the fat off the pig tails chewed right off. Everything was just right in this moment. We were nawing away in silence and occasionally glanced at each other in absolute awe. This was the best pig tail I’ve ever had, with the best sauce I’ve ever had. Thank god we ordered one each. 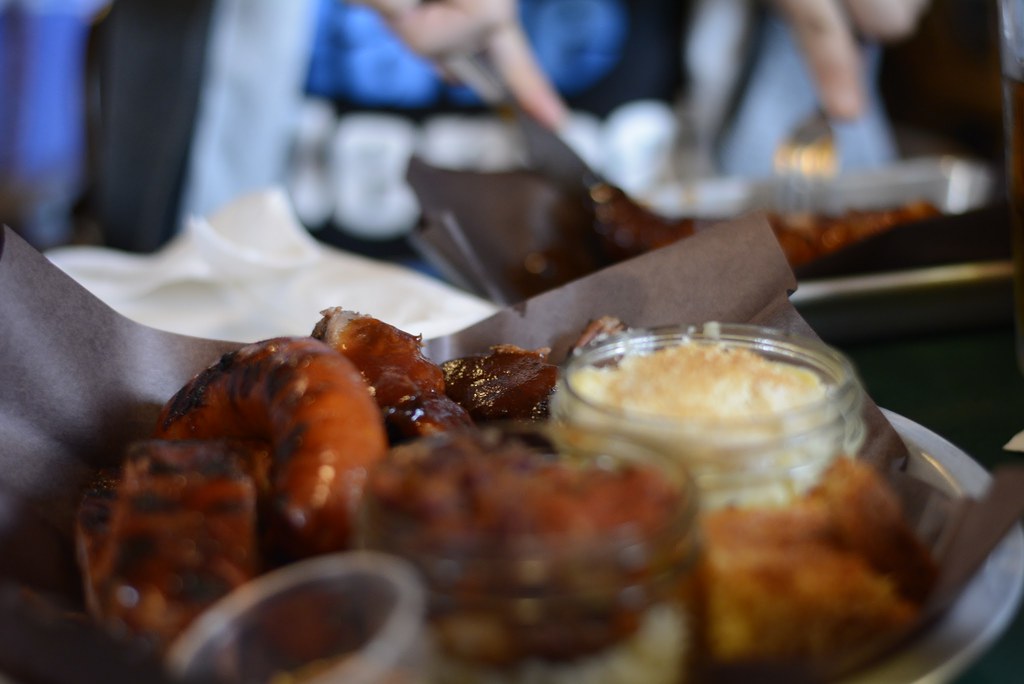 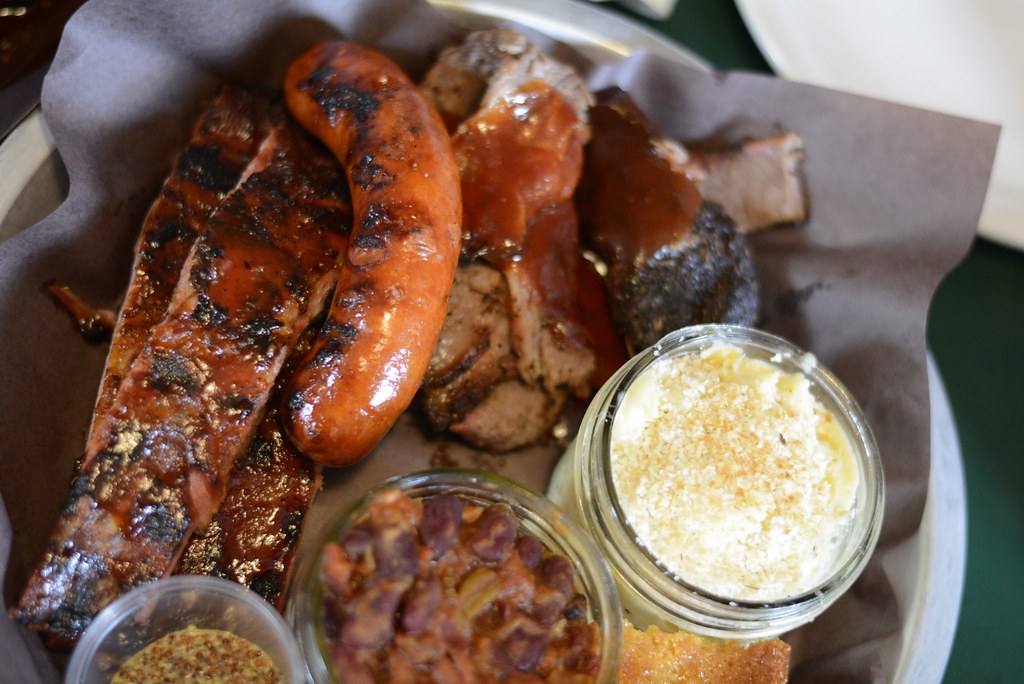 With meats of all sorts, second to come, was the three-choice meat platter. Three meats, two sides and one piece of cornbread. Of the meats, there was the usual assortment to select from: ribs, pulled pork, brisket, chicken, hot link and smoked whole wings. My immediate picks were ribs, brisket and a hot link. As for the sides, this was a choice decision as they had 12 sides to choose from… 12!!! We were torn between the picks and went with the reliable, or not so reliable mac + cheese and baked beans.

After those melt-in-your mouth bargain beauty pig tails, it was hard to feel excited about this platter. The brisket was great, hot links were not-so-hot and the ribs were good, but not as great as the first pieces of fall-apart meat we had – our question was, why wasn’t our entire BBQ adorned in that delicious Grandma’s BBQ sauce???!

As for the sides… We chose, probably the worst options. C’mon Alice, jalapeno hush puppies were on that damn list! The rice + beans were very boring and lackluster in any flavour at all and the mac + cheese wasn’t cheesy enough for me. Enough to say that we didn’t finish either. 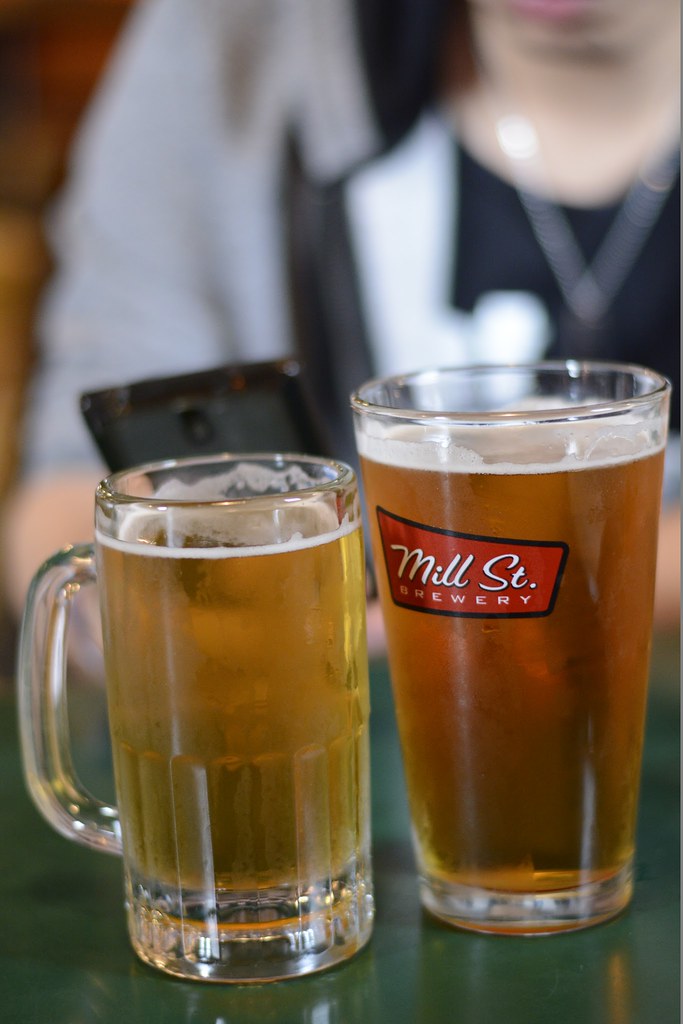 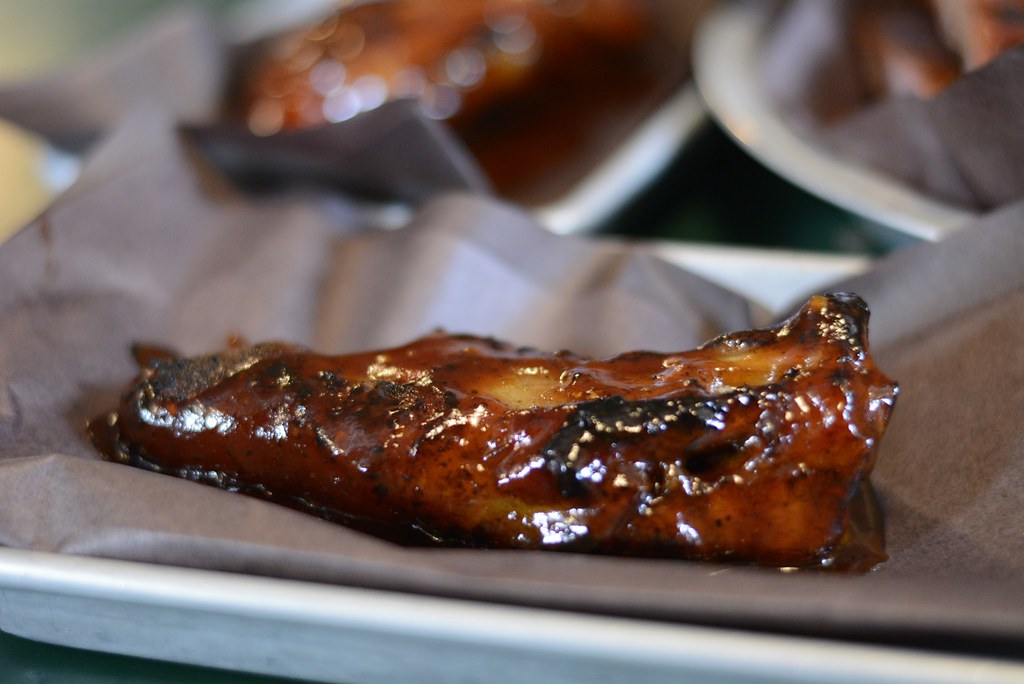 You’ve ruined me, pig tail with grandma’s secret sauce. All I do is compare every Southern BBQ meat I meet next to you. 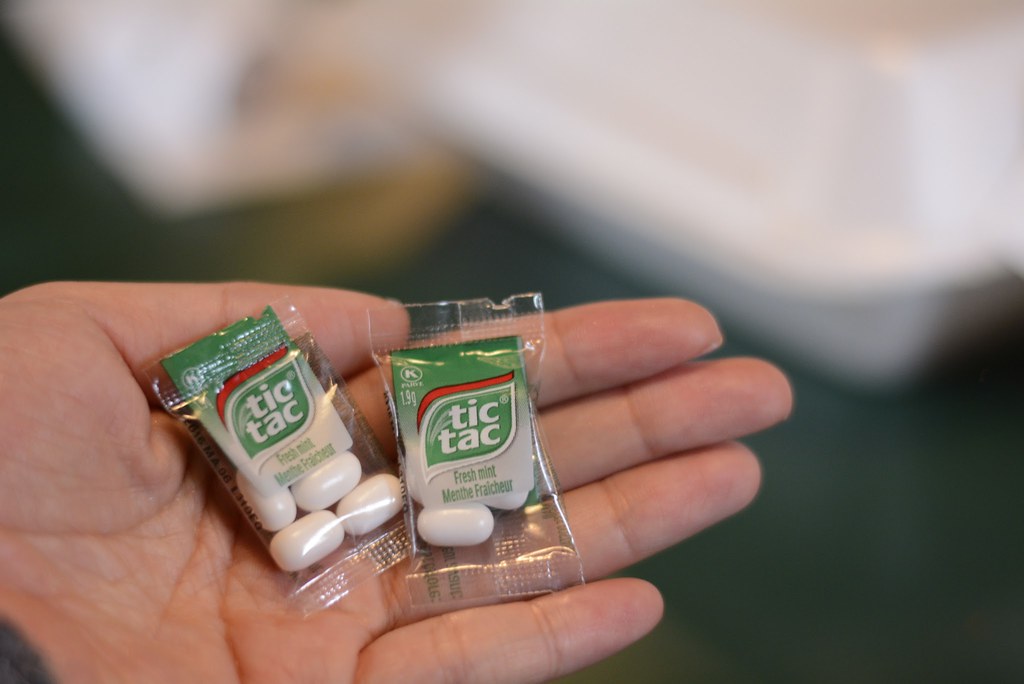 I would come back. Many times again. For those pig tails, and a sandwich as well as smoked chicken wings will be my sides. Honestly. Check out the menu and fall in love 5 times. There’s so much I would like to try beyond the BBQ platters. I had a happy BBQ time and will recommend this place to the next person! Oh, and if you’re from Kitchener or Waterloo, you’ll be seeing the Lancaster Smokehouse food truck drive around town, run as fast as you can to catch it, you’ll need to burn those pre-calories.