Alice 2 Comments
For Valentines Day, myself and three girlfriends went for dinner. I’ve passed by this place countless times since it opened more than six months ago and only now have stepped through it’s doors. I’ve only heard that it was pretty average and didn’t have some of the most valued dishes that people go to KBBQ for.
TK Something, is purely an all-you-can-eat, so there’s really no other options. Just $29.50/pp.
Ages 4-12 are charged $14/pp and below 3 eat free… Drinks not included. 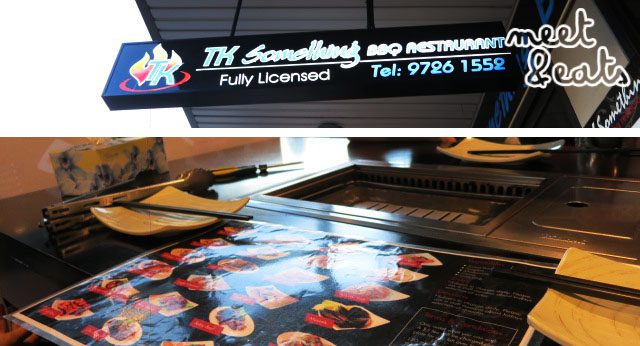 We were given (sticky) menus, that I didn’t really want to touch (lol) – it was double sided with a list of conditions running down the side. Maximum sitting time is two hours, which I believe we only stayed for an hour and 30 minutes and for every uneaten dish, we will be charged $5.
There was also a small self-serve desert bar.
What sucks the most about an all-you-can-eat… and them charging for each uneaten plate is that, we have to finish EVERYTHING on the plate. Even if we don’t like it.
We went ahead and made our orders:
– Beef patties
– Pork belly
– Octopus
– Calamari
– Chicken wings
– Satay chicken
– Corn cob
– Mushroom
– Onions
– Nem nuong 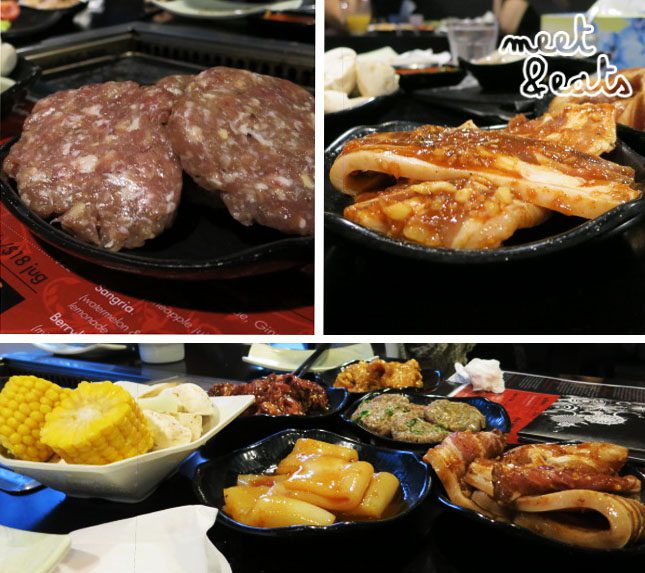 Now, this was a lot of food…
The Nem Nuong (top left) was terrible… And why do they even have nem nuong on their menu? It’s a Vietnamese dish. Get it right at least! We were absolutely forcing the patties down, the Beef Patty was pretty bad too. Everything else was okay, marinade not worth praising.
They didn’t even have cuts of beef in the regular marinade…

They even had sriracha among the sauces! We were cooking way faster than we could chew. 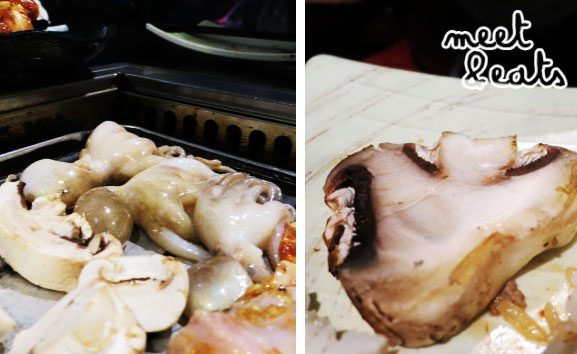 Octopuses waiting to firm up and a mutant mushroom 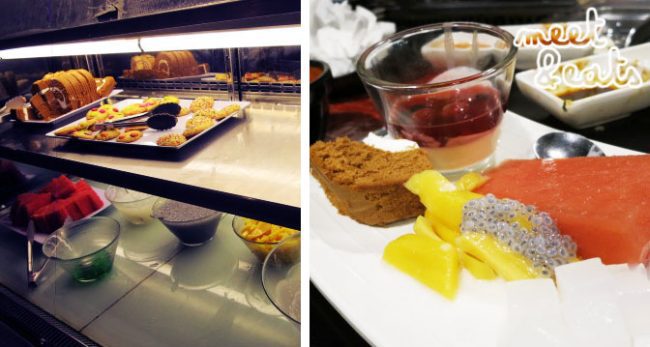 The slack dessert bar…. Wasn’t much variety going on!
Basil seeds, swirl cake slices, canned jackfruit, watermelon, pannacotta and coconut jelly.
The bad thing about cooking your own food, is not knowing when it’s ready… So two of my friends that were sitting opposite to me (cooking their own food), ended up being pretty sick the next day…
It was pretty dissappointing. It was a lot of stuffing ourselves with patties that weren’t even slightly appealing, and really nothing to look forward to eating next. Way too full after chowing down all the dishes and reaching for dessert… Not a good variety of meats either. I’d rather trek further for an all-you-can-eat KBBQ, TK Something, you’re not doing it for me.