Alice 2 Comments
PACIFIC MALL
4300 Steeles Ave East
Markham ON
L3R 0Y5 Canada
I have faint memories of this place. Five years ago, lurking through the Pacific Mall maze, white, white, white, everywhere! I certainly would need a compass (a Minecraft one, to be specific) to get to a particular shop around here. The shopping level is laid out with blocks of shops, with the pathways labeled by numbers. Since I’ve arrived, I’ve wanted to go to Pacific Mall for the longest time. I wanted to visit the Gapachon machine shop in particular, but it was brought to my disappointment that that place didn’t exist anymore. That place was heaven on earth.
Well, to my discovery during my Sunday Arvo visit, Pacific Mall is also filled with a hecka’ lot of other stores. Seriously. A lot of (just to name a few…) electronic, nails, phone cases, Chinese medicine, Asian lollies, collectible and …even an over 18 store! They had a lot of various goods, with shop names which did not match at all.
Taking one escalator up will lead you to the Pacific Mall food court! No memory whatsoever of this place, I didn’t even know that there was a second floor! But I was excited. Imagining all of the fish balls one could ever devour. 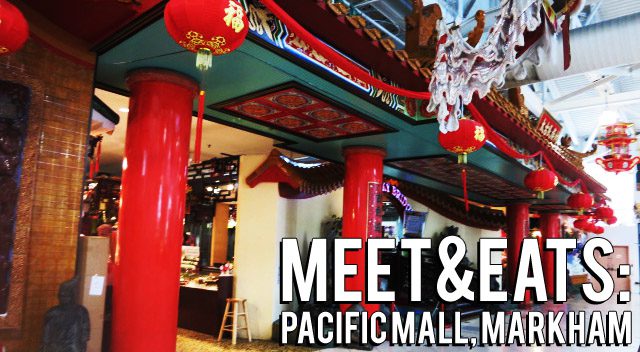 We walked past so many sweet stores. Definitely eating that later. Oh. That to. Oh boy, so many goodies. There were also so many of the same things from various stores. It was difficult to crack down, free-balling it and choosing which ever was slightly more appealing.
1. Sun’s Kitchen
I didn’t grab as many pictures of this place as I wanted to. These were hand-made, hand-pulled noodles! I was just so captivated by the menu prices. The fella creating the noodles was doing it all like a pro, no pictures, but there is some good footage over here.
The whole menu was the hand-made noodles with other goodies. There were:
Beef, Spareribs, Breaded Pork Chops, BBQ Pork, BBQ Duck, Shredded Chicken, Dumpling, Wonton, Seafood, Pork w/ Preserved Veggies, Tomato & Egg, Vegetable, Hot & Sour, Spicy Sauce, Crushed Chili & Vinegar, Chicken & Sesame Sauce, Spicy Pork and Cold Noodles!
I was trying to decide between the Pork & Preserved Veggies, BBQ Duck and the Wonton Noodle Soup. They also had many appetizers. But if this place is known for it’s hand-pulled noodles, I have to try them! 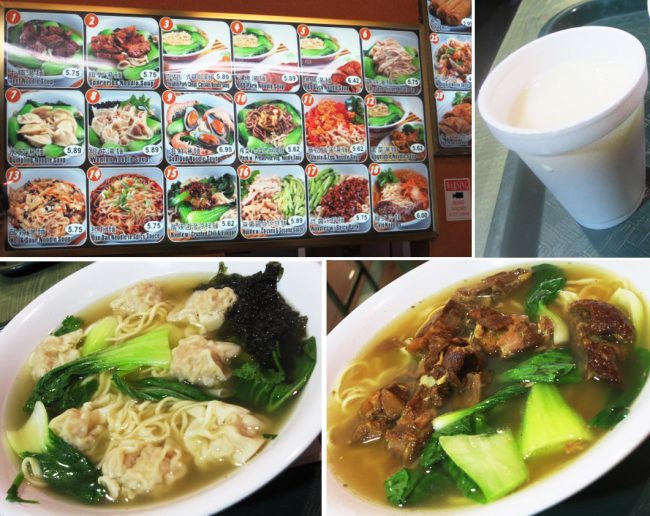 Each dish came with a few leaves of Bok Choy, a big helping of noodles and, a styrofoam cup of house-made soybean milk! This is too awesome!
A) Wonton Noodle Soup ($5.89)
Oh, the glorious smell of the chicken broth. It might not seem in the picture, but there was an incredible helping of noodles! So, so much! I think it’d be easy to split between two people and go ahead and order more menu items to snack on :p.
B) Spareribs Noodle Soup ($5.75)
The sauces of the spareribs have of course been mixed into the soup, the meat pieces were absolute melt-in-your-mouth, they were cooked perfectly with not much effort to bite into the cartilage pieces. 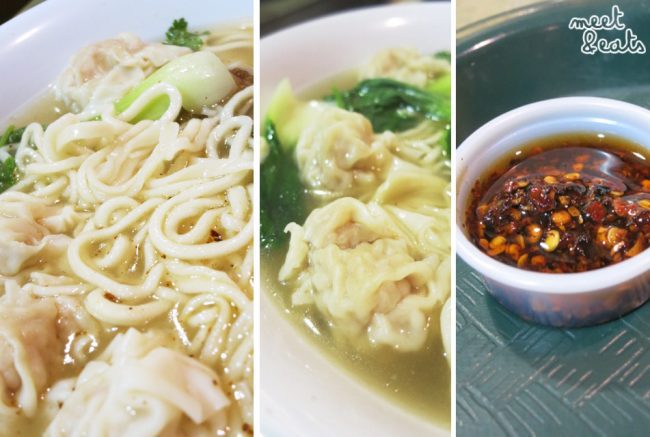 The noodles were fantastic! What I found most entertaining was examining each strand of noodles, how some were thick and somewhere thin – the texture and chewy, perfect bite of each one. There is definitely a huge difference between hand-pulled noodles and the usual you’re use to.
The Wonton pieces were small but full of flavour, I just hoped for more surprises biting into this, maybe an onion piece? perhaps? I enjoyed you nonetheless.
The gorgeous Chili Satay sauce on side!

2. ???
With so many (food) sights to see, I completely forgot to take note of the name of this place down. But it was situated not far to the right of Sun’s Kitchen! There were so many appealing menu items!
In particular, I had my eye on:
Fish Balls, Red Sausage, Squid Ball, Duck Giblet, Tea Leaf Egg and Rice Noodle Roll. 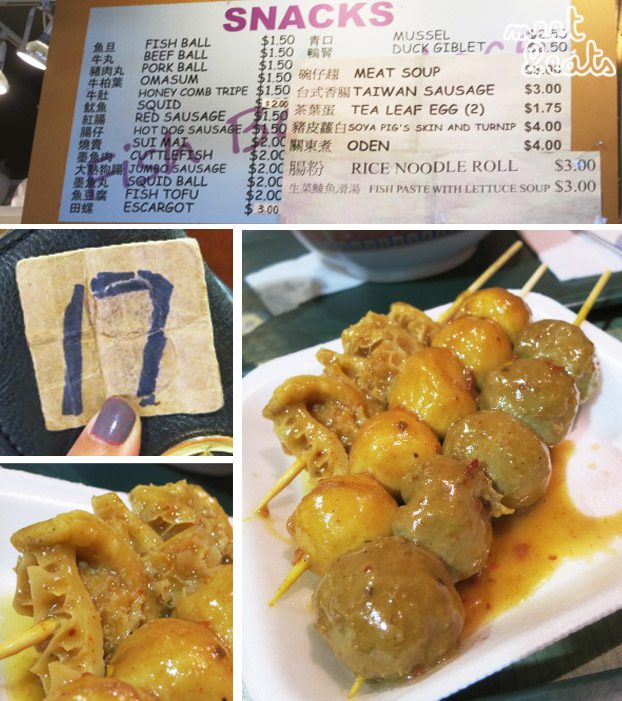 Given a cardboard #17, and, 8 minutes, even though 2/3 of them were cold – we received our tray of goods!
C) Honeycomb Tripe ($1.50)
I’m much better off sitting at Dim Sim King and enjoying this. This was unfortunately the best out of the three, scrawny bites of (not very) chili-sauce-infused tripe on a stick.
D) Fish Balls ($1.50)
I actually thought Superdish’s balls were slack. Much tastier than the beef balls though, but with much tougher skin. These have become my new least favourite place for fish balls.
E) Beef Balls ($1.50)
The first thing I nibbled on, and, it was average. Tasted like a plain ol’ beef ball from a bowl of pho, except smaller. I’m not sure what I expected. Can’t the sauce at least win me over?
3. ???
I cannot read Chinese. No idea what the shop name is, but the aromatic scents flowing from this place is incredible! They create egg waffles of all sorts here – Egg Waffle Puffs (pictured), Palm-sized Egg Waffle Crisps to-go ($3/1 box & $5/2 boxes) and… an Egg Waffle Ice Cream Sandwich! Are you serious? This is fantastic. Egg waffles are my favourite! And they had so many Ice Cream flavours to pair with it, to name a few, there were Honeydew, Taro, Green Tea and Red Bean, out of the exotic Asian flavours. Red Bean is a fantastic option for everything! 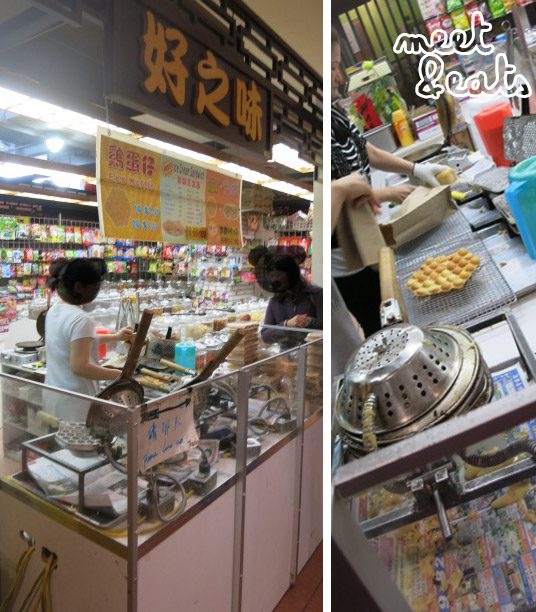 I loved these Egg Waffle Irons. They remind me of a miniature $7 plastic set I purchased many years ago during my not-so good times in Visual Arts class (lol).
Watching a lady pour batter onto a flat iron, and flipping it, then placing a block of Red Bean Ice Cream and rolling up the waffle. She then smoothly divided it into four pieces. Once we paid and had it in our hands, the waffle was hard! Magic.

F) Egg Waffle Ice Cream Sandwich ($3.50)
My first nibbles were breaking off the ends of the egg waffle, I’ve never had fresh egg waffles like these! I’ve only had Egg Rolls (slightly similiar in taste) when I was younger during Chinese New Year, and the ones like these, I’ve only had for my first time, 6 months ago, from an Asian grocer in Cabramatta out of mine and Gers Bear’s curiousity.
But this was amazing! Oh golly. I wish that were were chunks of Red Bean in this, this would have taken this Sandwich to the whole five potatoes, but oh shucks.  Next time I will definitely be purchasing two packets of those small waffles to go!
4. Yan Woo Soya Bean Specialty Foods
Located inside Market Village, is this beautiful older looking dessert shop. This is, no joke, the most incredible Soya Bean dessert I’ve ever had in my life. It is amazing. I just wish it was next door to me so I could (plump up) and have it every single day. I wish I could share the flavours with you all. It’s just, wow.
I’m pretty sure that you can always spend $5 or less and be super satisfied. They also had ‘Special Health Combos’ too. I wish I didn’t go for those fish, beef and tripe sticks, otherwise, I would be so on this!
From their range of desserts, you could grab a Soya Drink or Soya Bean Pudding Hot or Cold.
The Soya Drinks are priced ($1.25~2.99), with:
Coconut/Chocolate/Almond Flavouring, Sesame Rice Balls and Egg.
The Soya Bean Puddings have plenty of options, pairing it with:
Almond/Coconut/Ginger/Chocolate Flavouring, Evaporated milk, Tapioca Pearls, Grass/Assorted Jelly, Taro Grain and Red/Green Bean Paste.
It was pretty difficult to choose which dessert to settle for! I had my eye on the Grass Jelly and Red Bean Paste. They also have a few Chinese hot snacks. 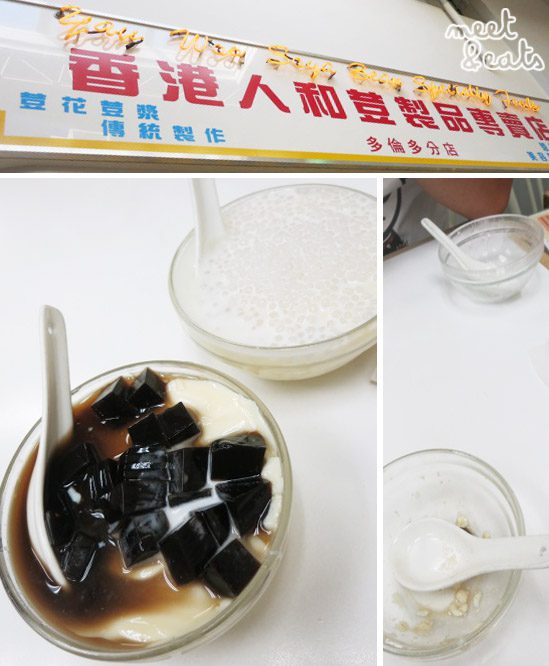 I absolutely enjoyed all my eats of this day! Many favourites from many places. The Soya Bean Puddy was a great way to end it all. I’m so glad I had a chance to try it all ☺.
Must eats:
– Any Noodle Soup from Sun’s Kitchen ($5-7)
– Egg Waffle Ice Cream Sandwich ($3.50)
– Soya Bean Puddy with Grass Jelly ($2.45)
Eh, it can pass…:
– Fish & Beef Balls and Honeycomb Tripe (from that once place near Sun’s Kitchen)