Alice 3 Comments
My second time here, and my second time feeling disgusting-ly full.
I’ve lived in Prairiewood for a couple of years and have hardly visited any of the restaurants in the area. On my first visit, my mate and I ordered a Chicken & Mushroom Crepe each, which was a mistake… I was just way too much for us to eat!
And this time.. My friend and I walked in to be seated, this place still feels incredibly amateur. After ten minutes of sitting we could clearly eavesdrop a lady, I’m guessing is the manager, telling off one of the workers just behind us at the bar, she seemed incredibly moody and ran off to another worker (who looked a lot older) to rant further on about the first.
The prices here are pretty high, and the menu items are that of, cafe food: pasta and hamburgers of that sort. 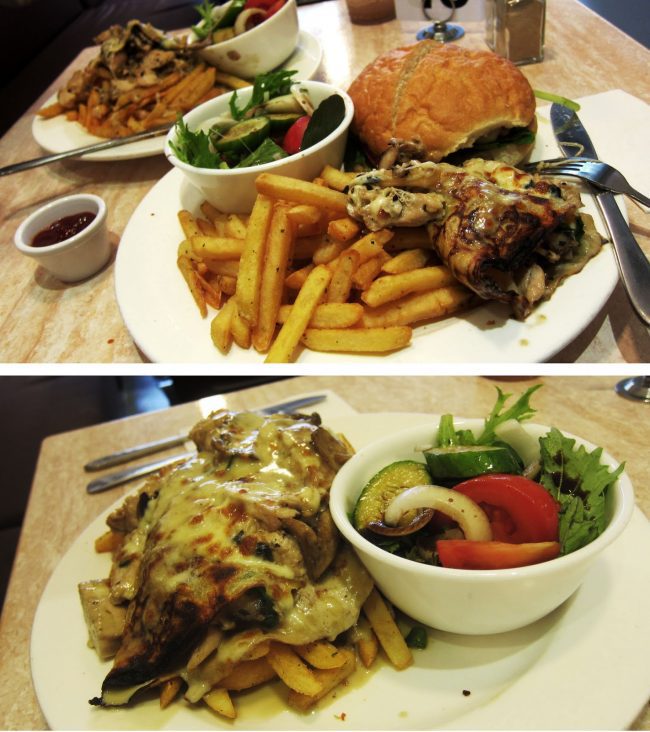 1. Chicken Burger (19.00)
And always, grabbing a side of ketchup to drench our chips in. The chips were okay. The burger, didn’t seem tasty at all, so we decided to leave it for last… And, with not surprise, it was as bland as you could imagine (we ended up getting the other half for takeaway… which, had 3 pieces of hair in it…. um, ok – I still feel grossed out thinking of it to this day).
2. Chicken and Mushroom Crepe (22.00)
As for the crepe, it was as massive as I expected it to be! Nicely cooked, though, but with an overwhelming oily and carb-y taste that you could just feel your arteries clogging up with each bite. The oil just completely took over the chips underneath (as seen). The first few bites were okay, but, it was sickening at the end, even though I shared it!
Was this really my second visit?… I laugh at myself. I just would not come here again.