With the right words, I will say yes to everything you say. Roll Play Cafe was a great lead-up after enjoying a bite at Happy Hooker. Squished right between The World’s Biggest Book Store and Panera Bread at Edward and Yonge, there is a staircase that leads up to the bright and inviting cafe. High ceilings and bright lights makes this place a great spot to hang out (and take food pictures in great lighting).
There are bookcases lining either ends of the wall, with neatly organised, stacks upon stacks of board games. I’ve only honestly played the few popular board games – Monopoly, Game of Life, Scrabble, Guess Who?, Trouble, Word Up, Badoo, Pictionary, Jenga and Cluedo. I’ve been truly deprived. But, I think that the bigger reason is that the costs for board games in Australia were atrocious; a $30 Monopoly board game here, would be $60 over there. There was no doubt as to why I didn’t play board games more often.
With such a great, place, there are rules!
– $10 minimum per person
– Limit two hour seating
– No split bills

1. Bubble Waffle ($11)
Bubble Waffle topped with Strawberries,  Bananas, Vanilla Ice Cream, drizzled in Chocolate Sauce
Not very pretty like the picture, I wanted some dang flower petals on ours! This was tasty though, we had to focus on eating this, rather than continue playing our game since the ice cream was starting to melt and soak up the waffle. I just wished for more ba-zaz (is that even a word?) for the price.

2. Jamocha Chocolate Fudge Cake ($8)
Way. too. dense. It was strong of mocha flavouring, and not much of a joy to eat. 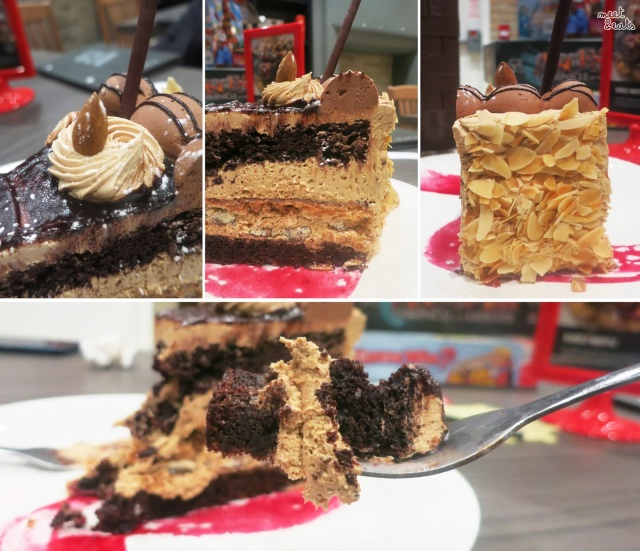 More pictures, because it’s just, really pretty.
We finished up, just over two hours, and it was a great time! We didn’t play that many games, I think we put all of our focus onto eating… and admiring the food a lot of the time. The games we played:
– Got Em’: A rather quick game, the purpose is to trap your opponent with ‘fences’, and through drawing cards, you can create a barrier and move
– Toc Toc Woodman: We hardly played this, this didn’t count. Just like Jenga… But… a nice improvement. It took a bit of time to build up the wooden block, and me, being very eager and competitive, I knocked the whole thing down with one hit. We quickly put this aside
– Hey, That’s My Fish!: A super quick game, and once you know the one rule, there is a clear winner. I had a faint idea upon guessing, so I won (yay)
– Chocoly: Placing 2×2 squares down in an attempt to gain the most connected blocks of your chosen chocolate pieces. 3/4 into the game, I thought my friend was the Milk Choc piece… And was really curious as to why he was helping me so much. I winded up realising that the was the Choc ones, and, I won within the last quarter of the game (yay)
Our score came to 2-1 (I’m the winner yay). Our bill came to about $23 for two people. As sort of a ‘giving mints with the bill’, they give dices instead! My friend had me guessing all night what the ‘mint’ replacement would be. This was such an exciting, and darling surprise!

Upon leaving, there are just so many wonderful things about this place! I love the thought into the decorations. I definitely did not find the desserts to be worth it, I think it would be much better to go with a large group of people, as there would be a chance to try a bit of everything, and not be sick of the same Mocha Fudge Cake….